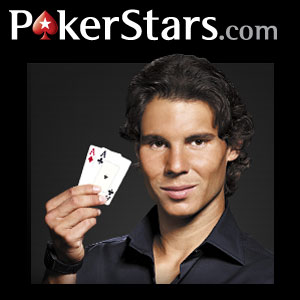 Last month the world’s number one tennis player Rafael (Rafa) Nadal revealed that he was set to play his first live poker tournament at the European Poker Tour (EPT) in Prague this December. Nadal, a winner of an Olympic Gold medal, is no stranger to competition and became one of PokerStars’ biggest celebrity sponsorships in June 2012. Since joining Team PokerStars SportsStars, Nadal has been honing his poker game in preparation for his live debut. All that training will definitely be put to the test as he prepares face off against another sports legend.

On December 12, Nadal will face off against Brazilian football legend Ronaldo Luís Nazário de Lima (Ronaldo for short) during the live charity poker tournament at EPT Prague. “Ronaldo has always been a hero of mine and I’m looking forward to taking him on at the poker table,” said Nadal. “The great thing about poker is that it’s a common ground for us to compete on, and there are many similarities between sport and poker strategy, so it will be good to see how he translates his game from the football field to the poker felt.”

Nadal and Ronaldo aren’t the only big names that will be competing for the €100,000 charity prize pool. Former Ukranian footballer Andriy Shevchenko, Italian skier Alberto Tomba, Dutch field hockey gold medalist Fatima Moreira de Melo (who is also a member of Team PokerStars SportsStars), and the world’s number one poker player Daniel Negreanu will all be participating in the event.

37-year-old Ronaldo entered the mainstream poker world earlier this year when PokerStars added him to their SportsStars team. As one of Brazil’s greatest football players, Ronaldo scored 62 goals in 98 matches for Brazil. He is also one of only three men to have won the FIFA World Player of the Year three times. Ronaldo took his skills as one of the best football players of all time and decided to see how they translated at the poker table.

Unlike Nadal, Ronaldo has played in live poker tournaments such as the Brazil Series of Poker and the European Poker Tour in Barcelona earlier this year. “This is going to be a great event, and it’s one of the few opportunities that I have to take on Rafa and the other athletes on a level playing field,” said Ronaldo. “We are all sports professionals, but in completely different fields, and poker is the level ground on which we can all compete fairly.”

In the months and weeks leading up to his debut at EPT Prague, Nadal has been constantly training to hone his skills. Taking time away from the tennis courts, Nadal goes over No Limit Hold ‘em strategies with his poker coach Alfonso Cardalda. A recent session had Alfonso discussing the Ace King starting hand, coaching Nadal on how to value the great yet complicated hand. With the session, Alfonso was able to see how Nadal is improving his skills at analyzing situations. By using his head, his game is getting better each time.

Nadal admits that in tennis he is able to come into difficult situations and know precisely what to do. When it comes to poker, however, he still needs to learn more on how to navigate those moments. He does say there are times when he knows he is in a perfect position or about to win a hand, a similar feeling that occurs during tennis. And in a few weeks, the culmination of Nadal’s tennis career and poker training will be on display for the world to see.