What Led to Racist Outburst in Oregon Poker Room? Did Chinook Winds Make it Worse?

A self-proclaimed “f*****g Nazi” who went on a racist tirade captured on video inside an Oregon poker room Sunday was severely intoxicated and triggered by inappropriate treatment from a floor manager, according to a player who was at the table where the fracas began. 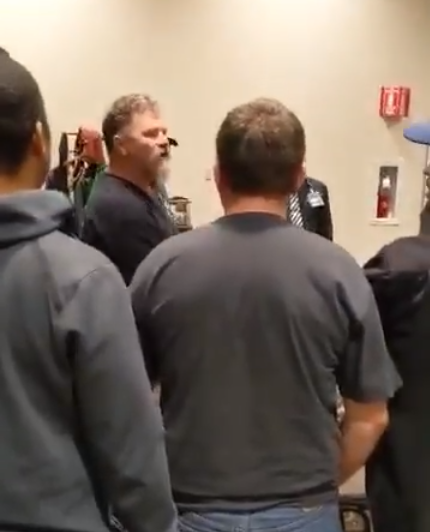 The poker player, who would eventually be identified as Ricky Forbito, 53, whose last known residence was in Oregon City, was caught on video at the Chinook Winds Casino in Lincoln City screaming at various players for several minutes while poker room officials stood by.

The 2:20 video shows Forbito verbally assaulting multiple people in the seven-table poker room, with particular attention focused on two African American players. Forbito can be heard hurling the n-word at both men nearly a dozen times.

Will Butler was on the receiving end of Forbito’s racist attack. We spoke with the 32-year-old civil engineer to find out more about the incident. He shared what transpired in the minutes before the video started rolling, and how he believes poker room management caused the situation to escalate.

Butler, a recreational poker player from Vancouver, Washington, made the 100-mile trip to Lincoln City for a $700 buy-in tournament with a $225,000 guarantee. He tells CardsChat News he had just sat down in a low-stakes cash game — “my first hand, actually” —  when a manager approached Forbito from behind.

According to Butler and others in attendance, Forbito was extremely intoxicated and reeking of alcohol when a friendly gesture from floor staff sparked the freakout.

“No one was arguing,” Butler says. “A manager came up from behind talking about something trivial and patted him on the back. He immediately jumped out of his chair and said, ‘why the f**k did you touch me?”

Butler tells CardsChat News he was originally standing up for Forbito because he could empathize with someone getting upset about being touched in public by strangers. But their table alliance was short-lived, as Forbito rebuffed Butler’s assistance, saying, in far more offensive terms, that he didn’t need help from a bleeping African American.

That sparked a heated exchange, Butler says, for about five minutes. The poker room management eventually got Forbito to calm down, but then shocked players when they were ready to let him stay in the game.

With Butler protesting, Forbito would be removed from the casino with chips still on the table, which is where the soon-to-go-viral video picks up and Forbito launches a barrage of n-bombs toward Butler and another African American player. He repeatedly challenges both the men to a fight.

This wasn’t Forbito’s first offensive explosion caught on camera. In the Facebook post where Butler originally shared the video, a commenter posted another video from Final Table Poker Club in Portland, Oregon. In that video, Forbito is seen threatening a female player with sexist slurs and can be heard twice warning the subjects of his outburst that he was a “f*****g Nazi.”

Butler says he deleted his original Facebook post (and with it the Portland video) because he didn’t like the direction it was heading, with many commenters calling for Forbito to be doxxed or worse. But he doesn’t hide his disdain for Chinook Winds.

“I’m asking the (Northwest) poker community to stand with me in boycotting Chinook Winds Casino,” he posted to a Facebook group for poker players in the Pacific Northwest. “I know this is a big ask for some of you … But I strongly believe that a precedent should be set that we won’t tolerate those who sympathize with self-proclaimed Nazis.”

While Butler says he’d love it if everyone in the area stopped playing at Chinook Winds, he knows that isn’t likely.

“For me, it’s personal,” Butler explained. “I got embarrassed in that poker room. But my dignity is more important than winning a poker tournament. I’ve got a lot of support. But at the same time, I’ve noticed some people are worried about losing money in their pocket.” 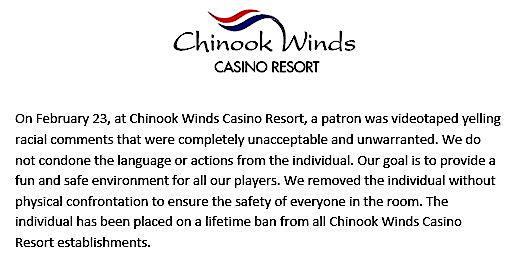 He also said that some people have told him to just “get over it.” The casino did finally apologize to him in a Facebook DM, but he referred to the apology as “cookie-cutter,” and said it wasn’t enough to change his mind.

“First and foremost, when he said the n-word the first time, he should have been gone,” Butler said.

Chinook Winds issued a statement on Wednesday, disavowing the actions that followed the original altercation. “We removed the individual without physical confrontation to ensure the safety of everyone in the room.” The statement went on to say the patron had received a lifetime ban from all Chinook Winds establishments.

CardsChat reached out to the Chinook Winds Casino Resort poker room for further comment, but had not heard back by publication time.

I always love additional details in situations like this because it tells more of the story.

Clearly this player has similar problems that have erupted in other rooms.

I don’t know what the laws are in Oregon but if the bar was continuing to serve him alcohol that might be an issue.

NO player at the table should have to tolerate another player berating them verbally with racial slurs or any other rants.

Sometimes people bring their personal problems to the poker table instead of leaving them at the door.