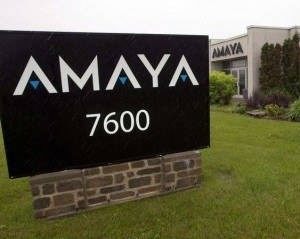 Amaya’s Montreal offices were raided back in December following a tip off by whistleblowers about “manipulative trading.” (Image: AP)

New details of the Amaya Inc stock trading investigation have emerged with the publication of a search warrant that was used by the Quebec financial regulator to seize computers, e-mails, and phone records from three Amaya officials, including its chief executive officer David Baazov.

The court lifted a publication ban on the warrant last week, revealing that as well as the Amaya records, AMF seized files from the offices of Canaccord Genuity Corp, Amaya’s deal adviser, where a senior executive, broker and a broker’s assistant are, or were, under investigation.

Records were also taken from 15 brokers at the Montreal branch of financial adviser Manulife Securities, which was not involved in the takeover.

The names of those under investigation have been redacted from the document, but the Globe and Mail newspaper, which has followed the investigation obsessively, has named the two Canaccord employees as Stuart Raftus, CEO of the company’s wealth management unit and broker Peter Kirby.

The warrant also lists the trading of Amaya stock by more than 40 Canaccord clients, most of whom were Kirby’s, according to a source close to the Globe and Mail.

Amaya’s Montreal headquarters were raided by police and AMF officials in early December, as part of an investigation into suspicious trading patterns in the run up to the company’s $4.9 billion takeover of the Oldford Group and PokerStars.

Amaya’s rapid rise in stock in the weeks prior to the announcement suggested something was going on behind the scenes, and rumors of the takeover were being reported in the gambling press a full three weeks before it was publicly made official.

Stock shot up by nearly 14 per cent in one day alone, on the Friday before the rumors were first publicized on CalvinAyre.com.

“The investigation reveals that certain individuals in possession of privileged information transmitted that information to several people,” wrote the AMF in an affidavit obtained by the Globe and Mail last month. “These people then took advantage of that information and traded on Amaya shares.”

That document also revealed that the investigation had been initiated by two whistleblowers, one of whom was identified as an employee at Manulife.

This whistleblower reported “manipulative and deceptive” activities involving Amaya’s stock by a group of more than a dozen employees in its Dorval branch, which is close to Amaya’s head office.

Both Amaya and Canaccord have said that, following separate internal investigations, they have found no evidence of wrongdoing on behalf of any of their employees, and Amaya has repeatedly emphasized that no allegations from the AMF have been forthcoming.

However, the investigation remains an embarrassment for a company that recently became listed on the NASDAQ and is determined to convince US regulators that it is worthy of a place in the US regulated markets.

I think that the US regulators will not look on this in a positive manner if the investigation proves wrongdoing and because of a few individuals with questionable moral values Poker Stars and Full Tilt may never get licenses to operate in the US.
Hopefully the investigation will clear everyone at Amaya of all accusations.