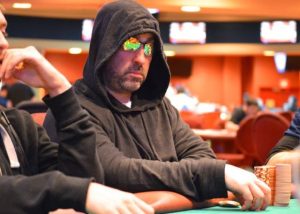 Professional poker player Jay Sharon finished 116th in the WSOP Main Event last year. That performance was good for $46,890. He’s probably going to need that money to pay his legal fees in the near future.

The New York native faces a strict penalty for allegedly serving as an illegal bookmaker. Prosecutors say Sharon, along with seven others, took in $3.5 million in bets annually on sporting events.

Sports betting in the United States is only legal in Nevada at licensed, regulated sports books. Individual bookmakers taking wagers do so illegally. New Jersey Governor Chris Christie, in recent years, has made a push to legalize sports betting in his state. A bill nearly passed last year but was halted at the last minute.

“Across the country, this group operated an illegal sports betting ring with impunity,” New York City Police Department Commissioner William Bratton said in the release. “Today, the house won with the arrest of eight defendants in and around Queens.”

Sharon and his co-defendants face up to 25 years in prison if convicted. A crime of this nature is far from a simple misdemeanor.

Queens District Attorney Richard A. Brown says the defendants conspired to make money illegally through unlawful gambling, which accepted bets on sporting events through wire rooms where gambling is illegal.

According to Brown, Sharon was the ring leader and all money “funneled up to him.” The DA also said this type of case isn’t uncommon in New York.

“Over the last few years, working with our law enforcement colleagues, we have taken down a number of these operations and put them out of business,” he said in a press release. “These cases, I believe, have put a significant dent in illegal gambling nationwide, and have saved individuals across the country millions of dollars in gambling losses.”

He’s Not the Only One

Jay Sharon isn’t the only poker player to find himself in hot water with the law over gambling accusations. Of course, every online poker player recalls the Full Tilt Poker crew, led by owner Ray Bitar, facing prison time for alleged money laundering in 2011.

The defendants are waiting to stand trial.

Jesus…25 years for bookmaking? Is that really the best use of the DA’s offices resources? Seems ridiculous to me, but I guess that’s how it goes down there in Murica