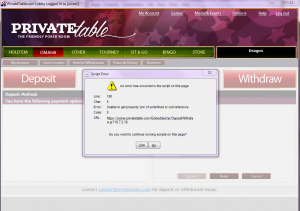 PrivateTable.com, the online poker site launched by the California Iipay Nation of Santa Ysabel, appears to be all but ready for real money play.

Recent changes at the site suggest that real money games could be up and running at virtually any time now, while play money and freeroll tournaments with gift card prizes are already scheduled to run.

The launch of the Santa Ysabel site has been awaited for many months.

Back in August, the tribe announced that PrivateTable.com would imminently be offering real money play to California residents, citing the federal Indian Gaming Regulatory Act and its tribal sovereignty as the basis for doing so without any framework in California for regulated online poker.

But in the months to follow, delays and setbacks continued to push back the date for a real money launch on the site. In the end, the tribe actually launched a bingo site first: DesertRoseBingo.com started offering games last month, using a proxy system in order to have all bets technically take place on the tribe’s reservation.

That launch finally drew the attention of the California Attorney General’s office, which has hoped to shut down any real money online gambling aspirations by the tribe. That came as little surprise to most observers, as it seemed likely that either the state or other gaming interests in California (or possibly both) would look to stop the tribe from getting around state gaming regulations.

Smooth Registration, But No Deposits

For now, however, both Desert Rose Bingo and PrivateTable.com are in operation. According to at least one report from a user in California, the site is now taking registrations, though some features are not yet active.

According to that player, registration went smoothly, but she was unable to make a deposit on the site. Given that, it was little surprise that real money cash games and tournaments both sat empty today at PrivateTable. However, when the California player contacted customer service about her deposit issues, she was told that the deposit situation would change in the near future.

“Thank you for your interest in PrivateTable! We currently are not accepting deposits but plan to do so very soon,” customer service stated in a response. “Our development team is currently working on the payment processing integration which is why you got the script error. Once they are done with the integration and testing we will be sure to let you know. Initially there will be options for depositing using bitcoin and most major credit cards, with more options to follow.”

The PrivateTable website certainly seems prepared for real money play: there are offers of a $100 bonus for new players, and a banking page mentions not only the forthcoming credit card and Bitcoin options for deposits, but also says that players can put money in or take money out of their accounts at a Smoke Shop on tribal lands.

While the Santa Ysabel tribe is hoping to launch the real money online poker operation by managing to navigate some muddy legal waters, the state of California may well be debating whether to regulate Internet poker on a larger scale in the coming year.

State Assemblyman Mike Gatto (D-Glendale) introduced a bill last week that would allow card rooms and Native American tribes to operate online poker sites in the state, though PokerStars and its allies are unhappy with a “bad actor” clause included in the legislation.