Though it is early in his poker-playing career, Princeton senior Bradley Snider is building an impressive resume in the game. The 21-year-old math major has utilized what he’s learned in the classroom and is taking it straight to the card room. 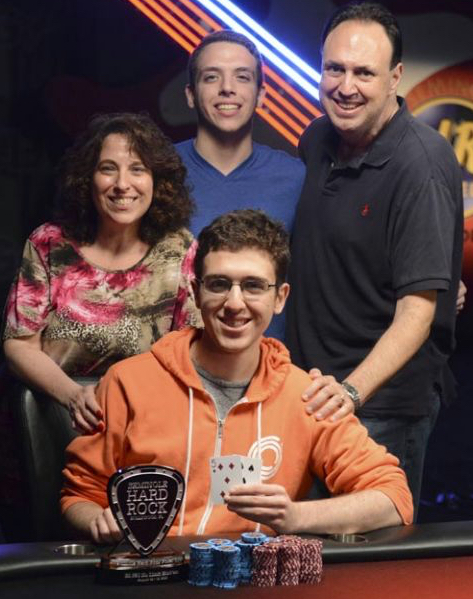 Bradley Snider (seen here in August with his family) is just 21, but the Princeton senior majoring in math has already had five finishes in the top 10. (Image: Seminole Hard Rock)

In just two years, the Florida resident has had five top-10 finishes, including taking the top prize in a tournament in his home state. His biggest cash was his first, at last August’s Seminole Hard Rock Poker Open, winning the $2,650 Freeze-Out event, and collecting $246,400.

Since that competition, Snider has had two seconds, a third, and an eighth-place finish. His career earnings to date are $277,539.

The Ivy Leaguer was introduced to cards by his family and used to watch his dad play. His younger brother is also entering tournaments in the Sunshine State, where the legal age for poker is 18.

When the older brother left for the New Jersey university, he began to take the pastime a lot more seriously. Reading books and studying probability and risk fit in perfectly with his curriculum.

“Me and my brother started watching poker on Twitch,” Snider said. “That’s what really got us into it. I wanted to play more and learn the game and study.”

Another advantage came when he joined the Princeton Poker Club, where like-minded scholars can compete against one another and learn strategy.

“It was a game about making good decisions over time, and that if I could remember the strategy, I’d have a chance to make money,” the senior said in an interview with Mercerspace.com.

Turning Pro Not in the Cards

Yet unlike a lot of prodigies, he isn’t interested in pursuing it as a career. After he won his first event and nearly a quarter of a million dollars, he wasn’t tempted to leave school like other students have done and become a full-time grinder.

“I think poker will continue to just be a serious hobby for me,” he told SouthFloridagambling.com. “I really enjoy playing casually and thinking about the game. And this will let me play a lot more poker in the future.”

Snider reiterated his career plans earlier this month, when he told Mercerspace.com that he has a job waiting for him when he graduates.

“When I’m playing poker it’s with money I can afford to play with, so I don’t feel bad about losing lots of games in a row, which might seem crazy to some people because it’s real money,” he said. “Poker is a hard way to make an easy living. Even though I won a tournament, I did get very lucky. I can’t expect to win like that in the course of the year.”

Though he wouldn’t mind winning this summer, when he plans on playing in the World Series of Poker in Las Vegas.