RJ Bell, founder of the Pregame sports betting advice website, says sports bettors can’t win “if you don’t understand the impact of luck.” His site created a formula to predict 2018 NFL win totals based on past luck. And its bad news for Bills, Chiefs, and Steelers fans. 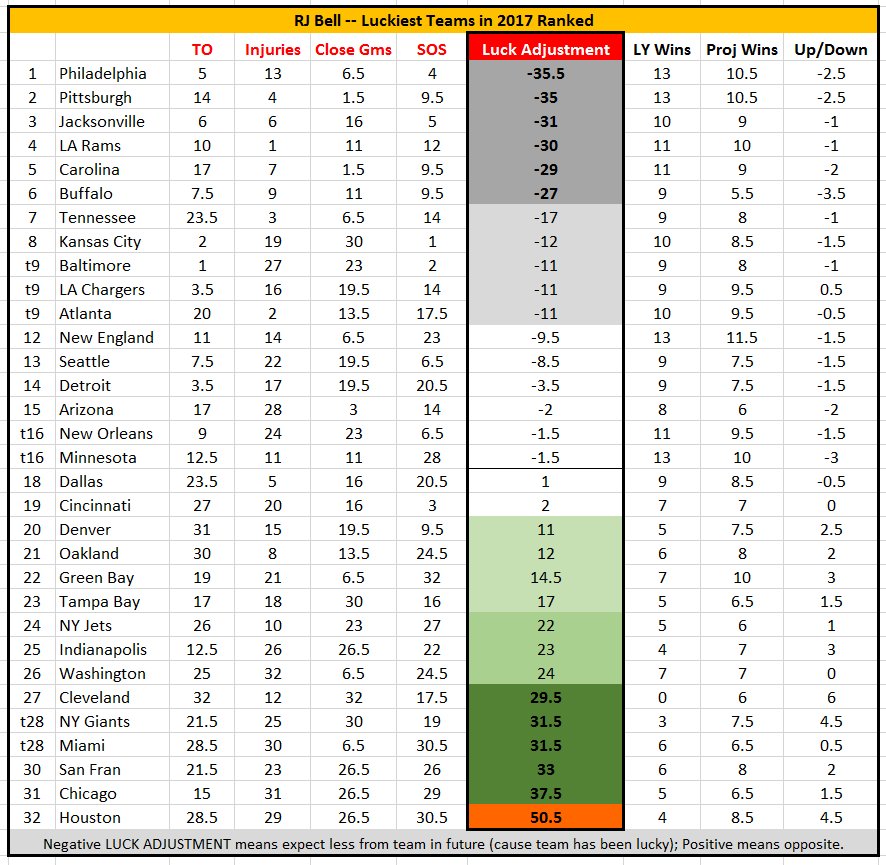 Pregame, a sports betting site, created a formula based on the luck factor to determine 2018 NFL win totals. (Image: Twitter)

Bell, a Las Vegas-based sports betting expert, understands that the best team doesn’t win every game. In many cases, luck plays a factor in determining the outcome.

It's nearly impossible to win betting the NFL if you don't understand the impact of LUCK. This @Pregame project is the first I've seen that gathers all of this important luck data in one place. It's worth understanding. pic.twitter.com/qPyQKbEips

The 2018 NFL season kicked off Thursday night with the defending Super Bowl champion Philadelphia Eagles holding off the Atlanta Falcons on the final play to win an 18-12 slugfest. Despite its victory, the reigning champs showed rust on offense. Or perhaps, Bell’s formula is correct in determining the Eagles won’t repeat last year’s success.

Philadelphia won 13 regular season games in 2017 and is among the Super Bowl favorites this year (10-1). But luck was on their side last year and again Thursday night. Bell projects the defending champs to win 10.5 games in 2018, 2.5 less than a year ago. They’re already on the right track at 1-0.

If you’re looking for a sleeper team to bet on, consider the Houston Texans. The Pregame formula projects the team to improve significantly. Last year’s squad suffered some key injuries leading to a disappointing 4-12 season.

Before getting injured, Watson showed great promise. Texans fans and many sports bettors are banking on his improvement and Watt’s return to the team.

Houston won just four games last year but the Pregame betting formula projects the Texans to win 8.5 games in 2018. The 4.5-game projected improvement is the second most in the league.

Bell’s website expects an even bigger improvement from Cleveland. The Browns went win-less in 2017 but appear headed in the right direction. Pregame predicts the 0-16 Browns will go 6-10 this year.

If you’re projecting wins and losses for NFL teams, you have to factor in the relative strength of a team’s schedule. Some teams that aren’t so great win many games thanks to playing a weak schedule. Bell considers these teams lucky.

As you poker players know, luck has a funny way of evening out over time. Take Green Bay, for example. The Packers played the second toughest schedule last year and went 7-9. This year, they have the expected weakest schedule and Bell projects a 10-win season.

I know we believe luck has a big part in poker, yes sports but also in lotteries and life, The pregame concept is interesting , if we were to compared projected game results and use the luck factor formula ,it may result into a winning combination towards predicting forward games, it would be something to really look into and give a trial basis to

Any additional information is good. Luck does in fact play into football, cards and life. If not, Brady would have 12 rings, Rodgers 5, and Hellmuth would have 98 wsop bracelets. LMAO