Fighting for nationwide online poker legislation will always be important to the Poker Players Alliance, an organization founded in 2005 that stands up for the rights of poker players. But with a reduction in financial support from the internet gaming industry (translation: PokerStars), the non-profit PPA is shifting some of its focus to sports betting. 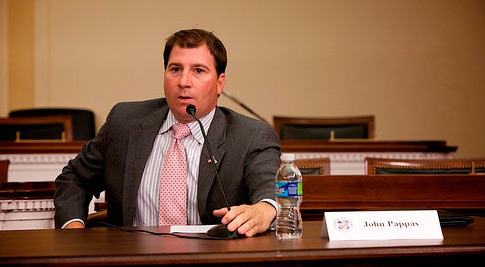 John Pappas will be stepping down from his role as executive director of the Poker Players Alliance at the end of February. (Image: pokerstars.com)

The organization announced in a press release that John Pappas, after more than a decade in his position, will step down as Executive Director. He will be replaced by the current Vice President, Rich Muny.

Pappas will stick around as a strategic advisor to the PPA and continue serving on the board of directors. In a press release announcing the move, poker Hall of Famer and PPA board member Linda Johnson referred to Pappas as a “tremendous leader” who “has been a political voice and face of the poker community.”

Under his guidance, the PPA has had many accomplishments beneficial to the poker community, over the past decade, including educating lawmakers on the benefits of legalized online poker and working with the Department of Justice following Black Friday in 2011 to ensure players got paid.

It takes money to keep a non-profit alive and, according to the PPA, the internet poker industry just isn’t bringing in enough dough these days. That has forced the organization to shift some of its focus to fighting for legalized sports betting across the United States.

“The PPA has been adjusting to a significant reduction in financial support from the internet gaming industry and thusly has refocused its efforts on cost effective grassroots advocacy,” read a statement from the PPA.

The PPA has emailed a survey to its members to gauge their interest in sports betting. The group has also added a sports betting page to its website to inform poker players who love sports about current and upcoming legislation.

Sports betting advocates are awaiting a decision from the US Supreme Court on federal sports betting legislation. Currently, only Nevada accepts wagers on sporting events. But that could all change later this year if the Supreme Court rules individual states have a right to license sportsbook operators.

Pennsylvania, for example, with its recently passed gambling expansion law, is now positioned to regulate and license sportsbooks should the Supreme Court rule accordingly.

Several other states, including Iowa, which saw a pro-sports betting bill advance through the state House of Representatives on Wednesday, are gearing up to one day accept legal wagers on sporting events.

The Supreme Court’s pending decision on former New Jersey Governor Chris Christie’s challenge of the Professional and Amateur Sports Protection Act, which outlaws sports betting in all but four states, is expected to be made by the end of June, but could come as early as next month, according to ESPN.

If New Jersey wins its case, many states could have the right to pass pro-sports gambling legislation.

Online poker faces unjustified legislation problems in many countries. The same happens with sports betting. There should be a global legislation. It is not logic in some countries the same site being legal and in others ilegal! It must be treated in the same legal way.

In those days when the Internet was not yet – it was not a problem. You just came to the casino, poker club, bookmaker office. They could be legal in your country or not at all. But this was not an international problem of legislation. With the advent of the Internet, everything has changed. The world has become large and global, and the legislation has remained at the level of hundreds of individual countries, with different cultural traditions (there are countries where gambling is banned for religious reasons and will never be legalized).

I think we will not soon see the desired progress in this area. After all, the United States, Russia and China are not very good at online poker, so do not expect that such international legislation, even if it appears, is unlikely to be good for players.

This to me is a bad sign for online poker in the US. I get that the PPA is pursuing all forms of online casino-type legislation, but for their focus to shift away from poker and more to sports betting tells me many things:
– Online poker is dead in the US if the group headed to save it has exhausted its financial might
– Americans in general prefer betting over poker especially when it comes to prop bets for the SuperBowl, March Madness, and general day to day wagering
– What does this say about PokerStars if they are the main backer pulling out of the PPA?

Here’s the thing – if online poker really wanted to happen in the US it would have done so by now, and there are a select few sites that permit online poker in the US. So if PokerStars, Party, and 888 aren’t going to go the route of others like ACR, what have they learned that we haven’t? Becuase I hate to say it, if the prospect of licensing a site capable of bringing well over $5M into one tournament, online poker needs a big face to save the industry in the US.