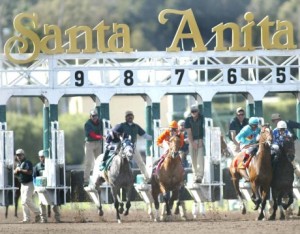 Many experts believe that California is a sure bet to become the next place in the United States to officially pass legislation that would allow real-money online poker. Recently, thirteen Native American tribes banded together to accept online poker within in the state. Now, Poker Players Alliance (PPA) Director John Pappas is concerned that disallowing horse racing tracks from participating might derail all the momentum gained in the Golden State.

A little background on this issue: there are two drafted poker bills floating the state assembly and senate in California. Both have specific language that disallows horse racing tracks from opening their own online poker rooms. This came at the specific request of the aforementioned Native American tribes when the legislation was drafted.

On the other side of the coin, the Morongo Band of Mission Indians, along with three popular California poker rooms, the Bicycle Casino (often referred to as ‘The Bike”), Hawaiian Gardens, and the Commerce Casino, have inked partnerships with PokerStars. When it comes to allowing racetracks to participate, none of them stepped up to say they would welcome the competition. If history is any indicator, California poker rooms, as well as Native American tribes, have wanted to dissuade as much competition as possible.

Under State Senator Rod Wright, bills that were introduced to allow online poker included racetracks. Currently, Wright has bigger problems to deal with, however, as he was suspended after being found guilty of eight different felonies for lying about his residence when he ran for office back in 2008. With his suspension, the racetracks have been without a proponent.

After attending the Global iGaming Summit and Expo in San Francisco, Pappas commented that without the horse racing tracks participating, it might be a bigger issue than the previously covered “bad actors” clause. He stated to press that he feels some level of compromise can be found on the issue of the “bad actors” clause, which would punish poker room operators, namely PokerStars, from operating at the beginning in the state.

Pappas flatly stated he felt that issue can be figured out and that anyone that points to that issue is just creating an excuse. The real roadblock for online poker legalization in California, according to Pappas, is the involvement of horse racing tracks. On this issue, he feels that there is no room for compromise.

Pappas stated that a horse track representative spoke at the conference, who flatly stated that “they still have powerful allies in the assembly and senate” and that the bills as-is would be unacceptable. On the other hand, Pappas said that some tribal representatives also spoke and made it clear that it’s unacceptable that racetracks be included. He felt that without some accommodations being made, the bills would simply get shelved.

Thirteen of the 25 card rooms outside of the big three mentioned before have maintained a firm stance on the “bad actor” clause, which would prevent those that maintained poker rooms after the Unlawful Internet Gambling Enforcement Act (UIEGA) in 2006 from entering the California online market. In light of Amaya Gaming acquiring PokerStars last month, it appears from those Pappas spoke with, that the position of many is starting to soften on this issue. It should also be noted that Amaya Gaming just happened to be the lead sponsor of the conference in San Francisco.

Sean, where does the following information come from?

Thirteen of the 25 card rooms outside of the big three mentioned before have maintained a firm stance on the “bad actor” clause, which would prevent those that maintained poker rooms after the Unlawful Internet Gambling Enforcement Act (UIEGA) in 2006 from entering the California online market.