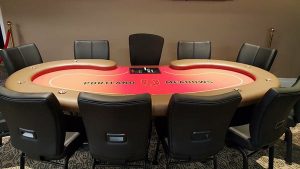 Portland Meadows Poker Room is not only operating illegally. It is doing so openly, without regard for consequences, according to an investigative report from Portland, Oregon’s NBC affiliate, KGW.com and a lawyer who has fought social gaming for years. But the laws aren’t cut and dry.

This isn’t some underground poker room from the movie Rounders. Poker players in the area know about it.

On August 13, the poker room posted an ad for a $10,000 guaranteed poker tournament that day. It also advertised its cash games and hours. But a lawyer who represents card rooms in nearby Washington state is speaking out against the competition.

“The way they’ve been operating in Portland is entirely illegal under the Oregon state laws and the City of Portland code as well,” Tom Rask, from the firm Kell, Alterman and Runstein, told KGW.com.

Rask claims the city refuses to enforce its gambling laws. That has caused his clients to lose business to new competition.

Rask believes poker rooms such as Portland Meadows are operating illegally but, is that really true? Oregon laws state that a card room can operate so long as it doesn’t make money off the poker games. Rooms such as Portland Meadows are considered social card rooms, and social gaming is legal so long as it abides by state laws.

Portland Meadows makes money but not off poker games. Instead, the card room charges a $10 cover fee. Poker players must pay this fee in order to get in. We have found contradictory information regarding this law. One source indicates a business can make money off cover charges, food, and beverages. Another disagrees.

Traditional card rooms and casinos in Oregon are only legal on Indian reservations. There is a total of 20 poker rooms in the state.

Another Portland card room, PDX Poker Club, was forced to close its doors last month. The poker room was deemed to be operating illegally and faced a $59,000 fine.

Some gambling laws in Oregon aren’t cut and dry, but it is clear that social card rooms are not allowed to pay dealers. They must work voluntarily or players must take turns dealing. Dealers at PDX were found to have been receiving money despite the poker room deeming them as volunteers.

State labor bureau investigators found the dealers were paid. The organization sent out a letter to all social gaming rooms letting them know dealers must be volunteers. Two days later, PDX closed up shop.

Portland Meadows hasn’t spoken publicly on this issue and it’s unclear if the state is currently investigating any wrongdoings at the card room.

Such hypocrisy in the law. the article doesn’t mention that Portland Meadows is a horse race track, with full wagering on the outcome of events the bettor has no control of (unlike poker).