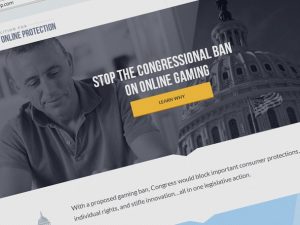 A new poll released by the Coalition for Consumer and Online Protection says most Americans are in favor of states determining their own Internet gaming destiny (Image: C4COP website)

Many Americans are firmly of the opinion that states’ rights are important in the United States and often times preferable to federal law. A recent North Star Opinion poll confirms that this view is certainly the case with regard to the issue of online gaming.

The survey was conducted by telephone with 1,000 people in various parts of the United States between January 25 and 29, 2014 and distributed by the Coalition for Consumer and Online Protection (C4COP), a pro-Internet gambling advocacy group.

Alison Siciliano from C4COP noted, “These results confirm what anybody with common sense knows: The American public doesn’t want Congress to pass a sweeping ban of all online gaming. A nationwide ban would put more Americans at risk online, and allow the current overseas black market gambling operations to thrive.”

The survey reveals an overall desire by respondents – all of whom were registered voters – to keep the issue of online gaming one that would be handled state-by-state. Their primary concerns include the black market, the ineffectiveness of a prohibition-type law, and attempts to suppress technological progress and innovations on the Internet.

Some of the more detailed highlights of the survey were as follows:

Many of those surveyed agreed that certain arguments were very persuasive, such as the statement that Delaware, New Jersey, and Nevada have proven that regulations in their states do work, which was persuasive to 69 percent. Similarly, a total of 64 percent agreed that a Congressional ban on online gaming would trample the rights of those three states.

Other persuasive arguments included regulation to keep games safe and fair, the simple reality that online games are not going away, and that they will be run on the black market with no consumer protections if there are no regulations in place in America.