High-rolling poker 20somethings Fedor Holz and Doug Polk are feeling generous this week. In an effort sure to grow their already sizable social media followings, the 2016 and 2017 WSOP One Drop High Roller champions are rewarding fans by giving away one percent of their profits in the Poker Masters series, which starts today, to a lucky winner. Everyone, even the President of the United States, is eligible to enter for free. 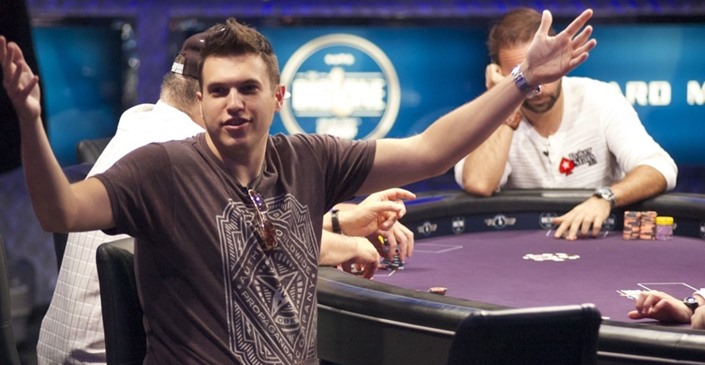 Doug Polk is building his following the more he wins, and seems to have found a way to give his fans a vested interest in the high stakes Poker Masters action. (Image: highstakesdb.com)

One percent might not sound like much. But in the Poker Masters, a series of five high-stakes tournaments kicking off Wednesday at the Aria in Las Vegas at 2 pm PT, millions of dollars up for grabs.

So, for example, if either Polk or Holz banks a $1 million win, which is hardly out of the question considering their records, the giveaway winner will take home $10,000. To be clear, they are talking about profits not payouts, so be sure to subtract entry fees before calculating your personal windfall if and when one of these two players scores a win.

The series consists of four $50,000 buy-in, two-day events beginning today, leading up to a Sept. 18 championship event, which has a $100,000 entry fee. The $50k events each offer a single re-entry. Other unique features for this series include playing seven-handed tables, use of 30-second “shot clocks,” and a rule forbidding headphones or sunglasses at the table.

You can watch the tournaments on a 30-minute delay on the PokerGO subscription-based app beginning at 2:30 pm PT each day.

Polk, the 29-year-old founder of training site Upswing Poker, has offered giveaways in the past. During the WSOP this summer, lucky fans won two percent of his net profits, which turned out to be more than $30,000 thanks to his $3.6 million score for winning the $111,111 buy-in One Drop High Roller bracelet.

The online heads-up phenom (screen name “WCGRider”) says he plans to enter all five events, totaling $300,000 in buy-ins without any re-entries. A couple of cashes could be worth big bucks in his contest.

If he doesn’t turn a profit, he still promises to give the lucky winner $500. He’ll use a random number generator to pick the winner from a virtual drum of his new social media followers, likers, retweeters, and subscribers.

8 Ways to Win 1 Percent of Polk

To be eligible for the giveaway, Doug Polk fans get one entry into a drawing for doing each of the following social media tasks. Do all eight and you get a bonus 9th entry. You can find his entry form here.

Holz has a similar list of entry steps for his giveaway. Primarily, he’s asking fans to download and sign up for his Primed Mind coaching app (it’s free) and share his “Life of a Champion” video. Like Polk, Holz has a list of social media tasks to gain more entries into his drawing.

At just 24 years old, Fedor Holz already has $23 million in live tournament winnings, including a $4.9 million win for scooping the 2016 WSOP One Drop High Roller. And that doesn’t even count the millions he’s won in online high stakes cash games under the moniker ‘CrownUpGuy.’

As of Wednesday morning, a link on Holz’s Twitter page revealed he already had more than 1,600 entries in his contest. Holz’ giveaway could prove profitable. Despite being semi-retired at 24 and only entering a tournament every month or two the past year, he still manages to win big most of the time he plays.

The German-born sensation has more than $3 million in cashes this year, and he isn’t even a regular on the high roller circuit anymore.