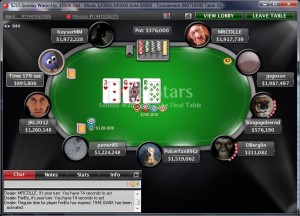 The final table of smallest  PokerStars Sunday Warm-Up in many years. (Image: PokerStars)

PokerStars is known for its big online poker tournament guarantees and even bigger prize pools. The two biggest tournaments each week are the Sunday Million with a $1 million guarantee, and the Sunday Warm-Up with a $500,000 guarantee, and large registration numbers eclipse those dollar figures every week.

This past Sunday – April 7 – was different, however. A rare glitch in the programming of the tournament disallowed late registration, which is the time that the vast majority of players register to play. The subsequent overlay was the largest in the tournament’s history and offered players quite a bit of money in the prize pool, courtesy of PokerStars.

As the PokerStars blog so eloquently put it in the weekend tournament recap, “Woops.” In a further explanation, the writer explained that “things happen.”

On Sunday – as most players began to discover that they were locked out of the tournament – they took to the forums and social media to express their dismay and find out what really did happen. Via the PokerStars Twitter account, the company responded, “Due to technical problems, the Sunday Warm-Up had no Late Registration. As a result players who wished to late reg will not be able to play. There is a substantial overlay in the event for those playing. We apologize for the inconvenience for those who wanted to play but couldn’t.”

The Sunday Warm-Up is a weekly offering on PokerStars with a regular guarantee of $500,000. Players can win their way into the $215 buy-in event through online poker satellites for as little as $3.33 or 54 Frequent Player Points. The tournament begins each Sunday at 11:00 a.m. EST, but offers 180 minutes of late registration.

Some of the best players in online poker have worked to win the tournament, as it is one of the goals of most competitors at the virtual tables. Team PokerStars Pro Liv Boeree even won the tournament back in 2011, defeating poker pro James Mackey in the heads-up portion of the event. Since that was prior to Black Friday and US players could participate, the guarantee was $750,000 at that time, and the field for the February 6 tournament included 4,710 players, which resulted in Boeree taking home $147,780.96 for the win.