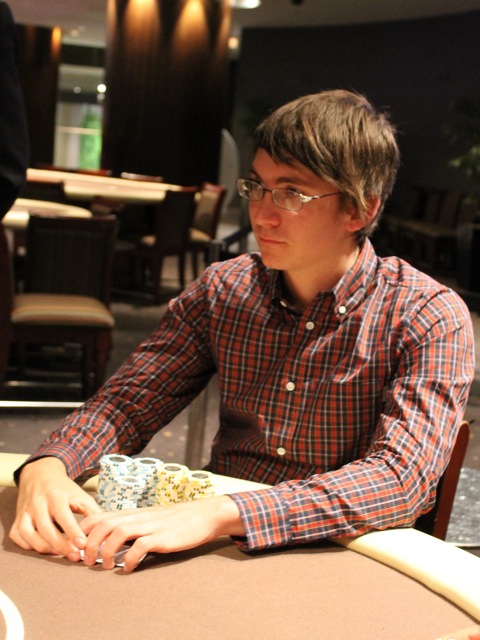 Anthony Aston, who trolled the micro-stakes with his newfound million this week. (Image: pokermedia.com.au)

Australian poker player Anthony Aston, known as “GrindHeaps” on PokerStars, became the latest Spin & Go millionaire this week, hitting the jackpot for an outlay of just $100.

Aston chose to celebrate by promptly sitting down in a $0.02/$0.04 unlimited buy-in ring game with the full $1 million, where he jammed all in frequently.

Since Aston had the second biggest stack on the table out-chipped by $999,998.45, this was probably a reasonable strategy.

Hilarity aside, GrindHeaps took just 33 hands to crack the jackpot, which is the least amount of hands ever for a Spin & Go million win.

He faced Irish player Gavin “gavonater” O’Rourke and an unknown Brit called “EnglishGirl9,” who had apparently only signed up to PokerStars that very day, according to the HighStakesDB.

Time to Move Up?

O’Rourke is a well-known player on the tournament circuit who cashed in five events at the WSOP this year. Just days before the auspicious Spin & Go, he finished 10th in the Main Event of the EPT Prague.

Aston is no slouch, either. The Canberra native has live tournament winnings of $168,638 and is a regular on the Australia and New Zealand Poker Tour.

But could these giant Spin & Go jackpots be about to become a thing of the past? PokerStars this week took the surprising step of curtailing the Spin & Go buy-ins available on its Spanish client.

Without any formal announcement, PokerStars has “top and tailed” the buy-in ranges in Spain, removing the highest stakes and the lowest stakes, and a few in between, which has the effect of cutting the options available almost by 50 percent.

The reason Spin & Go lovers playing in the global pool and on other clients should be concerned is that PokerStars often uses the Spanish market as a testing ground for new ideas. Spin & Gos themselves were first launched in Spain, as was casino gaming, in late 2014, before being rolled out elsewhere.

In short, if something happens in Spain, there’s a good chance it will happen everywhere else around six months later.

Him taking the $1million to the micro game is hilarious. It must have freaked the other players out.

If it was me, i will be going ALL=IN just to share the money with the micros… i will go ALL-IN 100 times and leave the table