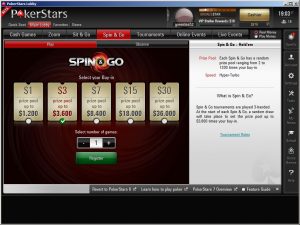 CardsChat is holding a special $1,030 Spin & Go freeroll at PokerStars on October 15 to celebrate the newly released game. (Image: PokerStars)

PokerStars has launched a new form of tournament poker game called the Spin & Go, and this week launched a new promotional week to celebrate. The new game is a hyper-turbo three-handed Sit & Go, available in a variety of buy-ins where the prize pool is determined by a new jackpot system and ranges anywhere from 2x to 1000x the buy-in.

To help celebrate the Spin & Go week promotion at PokerStars, CardsChat members with 25 or more posts will be able to join a special freeroll on October 15.

Each Spin & Go has a randomly assigned prize pool and offers players the opportunity to win up to $30,000 in mere minutes. The buy-ins start at just $1 and the game promises fast and exciting play. The randomly selected prize pool can award a player between two and 1,000 times the buy-in. The game is played three-handed and in a super-turbo format.

To play in a Spin & Go at PokerStars, go to the new tab found in the main lobby. From there, players will select which one of the five ($1, $3, $7, $15, $30) buy-in tiers they wish to play in and the number of games you want to play in. Players are then seated at a tournament table until two other players are registered and seated. As soon as a third player registers and sits, there is a random draw to decide the prize pool displayed at the table in a thrilling game-show manner.

The Spin & Go Week promotion at PokerStars kicked off on October 9 and will conclude on October 19. Players are encouraged to check out the Daily Spin & Go Challenges, which are accessible through players’ Spin & Go Daily Challenge window in the software client or Mobile App. Those who participate get a chance to win free Spin & Go tickets as well as cash prizes. Every day during the promotion, a new challenge is available and offers a unique reward. For example, on the last day of the promotion, players that win five real money ring game hands get one free $1 Spin & Go Ticket. For the full slate of challenges, players can visit the PokerStars Spin & Go Week promotion page.

CardsChat members who have 25 or more posts in the forum will be able to participate in the special freeroll tournament. The exclusive event will take place on Wednesday, October 15 at 15:00 ET, has a $1,030 prize pool, and will be completely free to enter for qualified members.

The format guarantees that 200 players will make the money, as the prize breakdown is as follows:

On its official blog, PokerStars posted the odds of various prize pools occurring during a game. While the odds differ depending on the stakes, the odds for $7+ buy-in games of getting a prize pool of double the entry is 72.8% and the odds of getting one four-times as much is 18%.

From there, getting a prize pool at a 7x rate is 8%, with one percent of all games seeing a 10x prize pool. After that, the odds get a little remote, but PokerStars stated that if your Spin & Go table randomly draws one of the three highest prize tiers, players are guaranteed some money as both the second and third-place finishers will get 10 percent of the first-place prize.