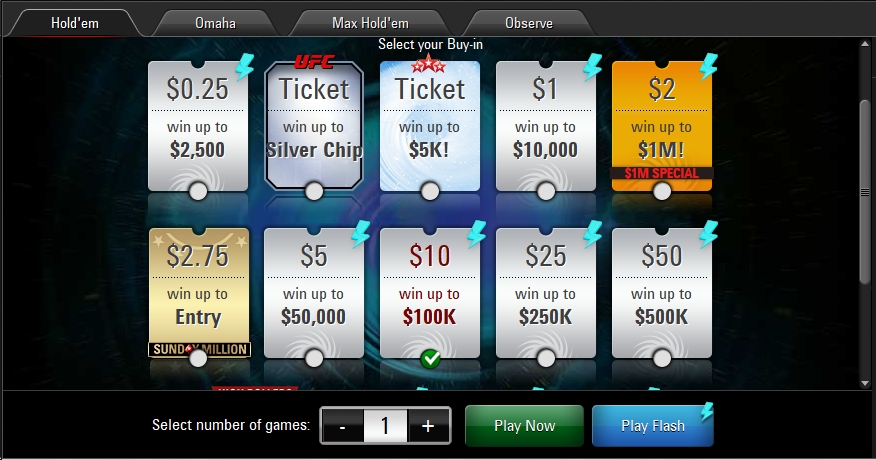 Although the update went live without much pomp and ceremony, the lottery-style games have been given a major overhaul. Heading the list of changes are reduced buy-ins.

In what appears to be another move aimed at casual players, the price of certain Spin & Go tournaments has been cut. Where once there was a price jump from $7 to $15, players can now take part in games costing $5 or $10.

As well as reducing certain fees, a new jackpot system has been created. Switching from game-to-game on a random basis, the $1 million jackpot will give more players a chance of winning a seven-figure sum.

The updates follow the introduction of Flash Spin & Go tournaments and should increase their overall allure. However, PokerStars has also upped the rake on selected games.

Where there were once $60 games charging 5 percent rake, PokerStars now offers $50 games with 6 percent rake. Further down the buy-in ladder, $10 tournaments are now raked at 7 percent compared to the 6 percent charged by their $15 predecessors.

Almost in unison with the changes at PokerStars, two other industry leaders have updated their STT software. Focusing on players and payouts, 888poker has altered the structure of its Blast tournaments.

A representative for 888poker told 2+2 forum users that the changes are intended to make the “games start faster.”

Rivals Hit Back at PokerStars

While its peers have focused on speed and payouts, Partypoker is now rewarding consistency. Launched on December 4, a new Sit & Go leaderboard will payout $23,500 to the top players each week.

Achievements will be relative with games split into four tiers:

Only standard Sit & Go tournaments, not Spins, will count towards a player’s score.

As the end of the year approaches, STTs are once again become a battleground. Throughout much of 2019, Partypoker and PokerStars were locked in a value war.

Using a combination of software updates and prizepool upgrades, the two used their STTs as weapons with which to poke their counterpart.

With 888poker entering the fray, the stage may be set for another round of single table innovations as we move into 2020.

It’s nice to see poker888 using a leaderboard.
This way the swings can be less hard.

It’d be nice to see a lowering of rake between the sites for competing with one another.