PokerStars launched real-money play of their new “Power Up” game earlier this week serving European players on PokerStars.eu, but some critical bugs forced Stars to pull the game from mobile and desktop clients after less than two days of play. According to company officials, PokerStars Power Up, a game indicative of PokerStars’ new strategic directions, should be back up and running early next week. 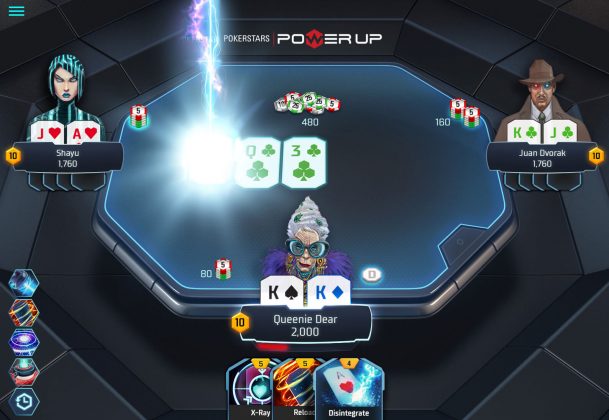 PokerStars Power Up players can choose between 14 different avatars, each with their own special powers. (Image: PokerStars)

What Is PokerStars Power Up?

PokerStars Power Up is a three-player Sit & Go variant that tries to add a little more gamification to the game of poker. Featuring buy-ins of $1, $3, $7, or $15, each participant selects one of 14 avatars. With names such as Arlo Shank, Queenie Dear, and Murray Hoarsebark, each player option has different “power cards” that you can play during an otherwise normal game of no-limit Texas hold’em.

For example, the “Disintegrate” power card allows you to destroy a board card dealt in a betting round. Meanwhile, the “Upgrade” card permits you to draw a third hole card while discarding one, and the “Reload” gives you the opportunity to redraw one or both of your hole cards.

Essentially PokerStars Power Up is a hybrid of traditional Texas hold’em and popular games akin to Hearthstone.

Because of complex graphics and its futuristic design, however, Power Up is not supported on PokerStars’ hand replayer, though players can use regular text hand histories.

“The team have worked incredibly hard to produce a brand new game which, by utilizing our custom engine, delivers incredible mechanics and an engaging universe,” said Severin Rasset, Director of Poker Innovation and Operations. “We are immensely proud of this major innovation to poker and we hope our players love it as much as we do.”

PokerStars Power Up is the latest attempt by an online poker site to offer players a more engaging game, one that combines elements from customary hold’em and other esport games. Some of these attempts to alter the poker gaming environment have worked well, such as 888poker’s BLAST poker and PokerStars Zoom, while others, such as the GPI’s HoldemX, never seemed to gain much traction.

At 2 pm ET on Wednesday, PokerStars Power Up, along with all advertising for it, mysteriously disappeared from the client. PokerStars took to Twitter to announce that the mobile version was “temporarily unavailable” but promised the problem would be resolved soon.

Nearly 12 hours later, Lee Jones offered an update from PokerStars’ technical team, which have dealt with their fair share of glitches in the past. He explained that the bug caused the mobile lobby to only show PokerStars Power Up games in the search and filter functions, meaning all other game options became invisible.

“As a result, we have removed PowerUp from our desktop and mobile platforms in order to ensure players continue to have a high quality experience,” Jones wrote. “It is important to note that the Power Up real money experience was not impacted and performed as we had expected.”

Jones went on to reiterate that no live games were affected, funds were secure, and that they expect it to “be back up and running early next week.”

Plans are also in the works to launch the game on .NET, .COM and .UK throughout next week.

Very interesting, I have to try this “variation”;).