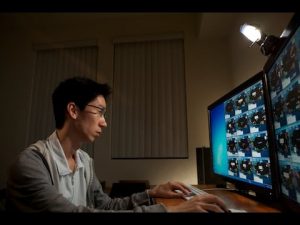 Randy Lew is set to use his poker skills to wow the eSports world as a part of Team Liquid. (Image: YouTube/PokerStars School Online)

Poker pro Randy Lew has become the latest star to crossover to the eSports world thanks to a new deal with Team Liquid.

Lew, who is better known to many by his online moniker nanonoko, made a name for himself in the online poker community thanks to his ability to multi-table dozens of games at once.

In 2009 he made headlines by surpassing the $1 million mark in online cash game earnings and, since then, he’s gone on to achieve Supernova Elite status at PokerStars multiple times.

On top of his online exploits, Lew has banked more than $1.1 million in live tournament earnings, a record that includes a win in an APPT Macau Main Event.

Thanks to success as both a live and online pro, Lew has built up a strong following among the streaming community on Twitch and YouTube.

But, for all his time spent playing poker, Lew has always maintained an interest in computer gaming. Initially a national level Marvel vs. Capcom 2 video game player, Lew remains a fan of eSports and this interest has led him towards Team Liquid.

Set to run alongside his current sponsorship deal with PokerStars, Lew will now represent Team Liquid in Hearthstone tournaments around the world.

The deal was announced at the recent Dreamhack Winter 2016 event in Sweden and will see Lew join fellow poker pro and PokerStars peer, Bertrand Grospellier.

Although he might not have as much experience in Hearthstone as poker, Lew believes there are many parallels between the two games.

“Hearthstone has many similarities to poker in that it’s a turn based card game where you are trying to figure out your opponent’s moves so you can optimize your turn. I think my experience in poker will allow me to learn quickly and fulfill my desire to be one of the best in Hearthstone,” Lew told fans at Dreamhack.

As well as marking another milestone in Lew’s career, the deal signals another crossover between poker and eSports. Over the last few years the two industries have started to find some common ground through its players and various gaming innovations.

The Global Poker League (GPL), for example, has modeled a lot of its features on eSports. In fact, since its inception, GPL founder Alex Dreyfus has vowed to use it as a vehicle to “sportify” poker, which is a direct nod to eSports.

Lew’s crossover to Team Liquid will certainly help strengthen the ties between poker and eSports and, potentially, bring new players over to our side of the equation in the coming months.