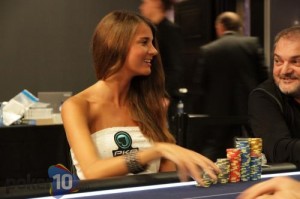 Sofia Lovgren is one of many players who doubts PokerStars rake protests will have much impact on policies. (Image: pokeryajedrez.com)

PokerStars rake restructuring has received a lot of heat from players over the recent increases in many of the site’s games. Perhaps, then, it was inevitable that a backlash in the form of protests from regulars would inundate the site. At least three such protests have been organized so far in November, though their results have been mixed at best.

The first and most visible call for action against PokerStars came from the News, Views, and Gossip forum at twoplustwo.com. The idea was a classic one: a sit-out protest in which players would sit down at cash game tables, then refuse to play. Instead, players would use their seats to chat with other players about the reasoning behind the protests.

That protest was planned for November 5, but to the best of anyone’s knowledge, it had no real effect. PokerScout numbers suggested that cash game traffic was actually up seven percent over the previous month at PokerStars. The problem, it seems, was a lack of organization by protesters, which helped ensure that games ran smoothly for most players on the site.

They may have had more success with a more targeted approach. That’s what members of GispyTeam, a Russian online poker community, decided to do by blocking access to heads-up cash games, those where rakes almost doubled under the recent PokerStars changes.

In this case, it seems that the protest had at least some effect. According to reports, the number of $10/$20 heads-up games running dipped significantly while the protesters were in action, while the waiting lists on the tables became very long, discouraging non-protesters from even trying to get into the games. Some players who were actively disrupting the games were even banned by PokerStars as a result, a sign that the protests were seen as effective by poker room officials.

Finally, a less visible protest from regulars who enjoyed high stakes hyper-turbo heads-up sit and go tournaments may have also had an effect, though one that was somewhat subtle. Many regulars agreed not to play against each other under the higher rake structures, a move that significantly reduced the volume of such tournaments firing at higher stakes levels.

Amaya Buy Out Not Sitting Well with Everyone

The PokerStars protests come in reaction to rake changes that, combined with other policy changes in recent months, have some players wondering about the future of the world’s largest poker site, particularly under its new owner, Amaya Gaming.

“This is terrible for the players, especially those who play on a regular basis,” Jonathan Little told PokerNews. “While this initial rake increase is fairly small, I can foresee other sites increase their rake as well. Also, in the future, PokerStars may decide to further increase their rake, making the games unprofitable for even the best players.”

Sentiments like those make it easy to understand why players would want to protest the recent changes. But many players believe that such protests will never be large enough or organized enough to make a real impact on PokerStars.

“I don’t think it’s a very effective idea,” 888poker Team Pro Sofia Lovgren told PokerNews. “There are so many players playing at PokerStars, as at any of the other top rooms, and we should realize that the ones who discuss in the forums are actually a very small part of them. In the end, a room would probably not even notice a protest like that one.”