PokerStars Power Up Goes Live For Second Test in the UK

PokerStars latest innovation, Power Up Poker, could be a step closer to reconfiguring our perception of the game as its second alpha testing phase get underway in the UK. 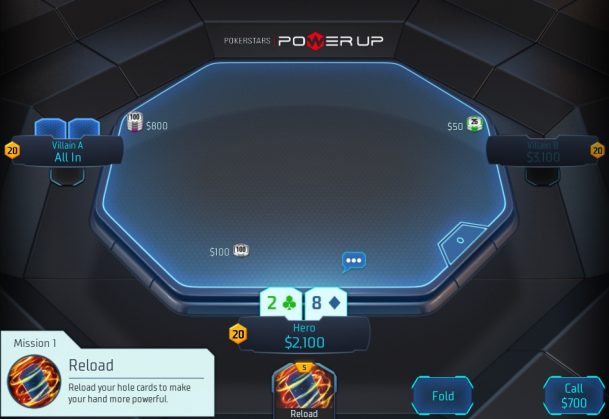 PokerStars’ latest poker concept, Power Up, has gone live for a second round of testing in the UK. (Image: PokerStars.co.uk)

Following an initial alpha testing phase back in July, PokerStars has re-launched an improved version of its novel concept. Going live in the UK on the weekend starting August 26, the latest version of PokerStars Power Up is now available to play for free with the following dynamics:

It’s More of a Game

Unlike PokerStars’ current selection of games, the dynamics bring a greater element of gameplay into the mix. By fusing pure poker action with features you might see in a game such as Hearthstone, PokerStars’ development is hoping to redefine the notion of online poker and, moreover, make it more appealing to casual players.

As well as setting the dynamics in second rollout of the game, the tech team at PokerStars has fixed a number of bugs, including issues with cards not appearing, inaccurate game data localization issues.

Following the UK release, PokerStars is planning to make the game live across various international reasons in the coming weeks.

Once players have had a chance to experience and then report back on the game, PokerStars will look to make more refinements before releasing the final version towards the close of 2017.

At this stage it’s unclear what stakes players will be able to play for when the real money version goes live, but the likelihood is that it will be for low limits.

Given the styling and overall nature of the game, PokerStars will want as many novices to play Power Up as possible.

As news of Power Up’s release in the UK filtered through the community, PokerStars pro Daniel Negreanu did his bit to promote the product. In addition to reconfirming how entertaining it is, he stressed that it will actually bring some new strategic concepts to the mix.

“When players get a chance to fiddle around with Power Up I’m convinced they will find it fun and even more strategically dynamic,” tweeted Negreanu.

While some poker players will likely rally against the new game, the popularity of Spin & Go tournaments suggests it will have its fans when the finished version is available around the world.

What is PokerStars Poker Up Poker?

In simple terms, Power Up is just like any standard sit and go tournament. However, in addition to starting chips and randomly dealt cards, players will be given special powers. These powers are randomly assigned and there are nine in total, including:

Intel = View the deck’s top card for the rest of the hand.

Upgrade = Draw a third hole card and then discard one.

Using a power requires energy and each one has a different cost. Each hand you play will replenish your energy levels, but anytime your metre reaches zero, you won’t be able to use a power. This combination of powers and standard betting is what makes Power Up much more of a “game” and something PokerStars’ executives believe will bring a dynamic to its product.