Life-changing money will be handed out to the eight remaining players in the $25,000 PokerStars Players Championship on Thursday. Well, except for Talal Shakerchi who is already worth an estimated nine figures. 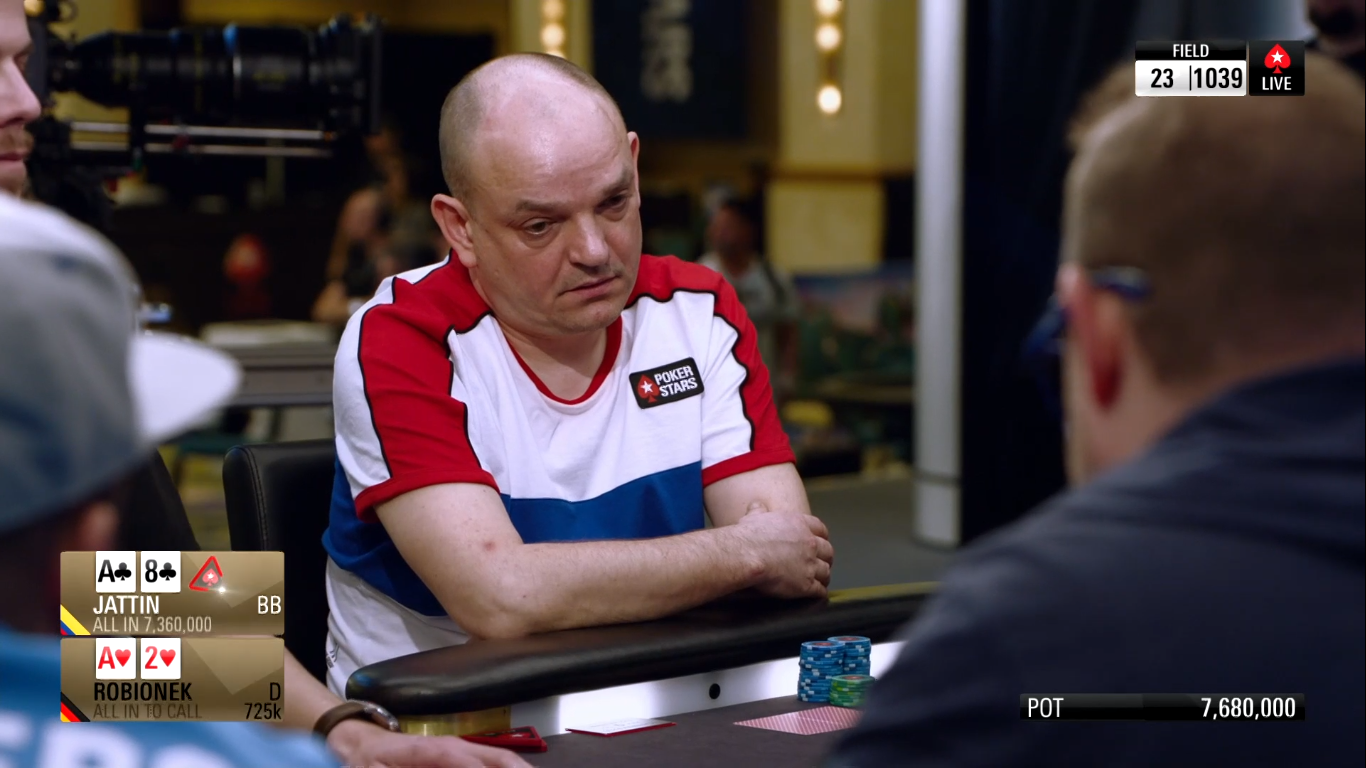 Michael Robionek turned a $0 investment into $150k and a free trip to the Bahamas, and enjoyed every minute of it. (Image: Twitch)

CardsChat ambassador Jacki Burkhart was unable to run up her short stack on Wednesday. She was the first to go on Day Four as she was eliminated by Kristen Bicknell in 38th place out of 1,039 entries ($86,400).

There have been numerous interesting story lines throughout this historic event. Hundreds of players got the opportunity of a lifetime, a shot to compete in a $25,000 buy-in event for free. And many of them certainly made the most of it. That includes Burkhart and also Michael Robionek whose story is almost unbelievable.

Robionek won a freeroll to earn his Platinum Pass and turned that into $150,600 for a 21st place finish. But even more important, he got to live out his dream of playing in a big tournament. Never before had he cashed in a live tournament and, likewise, he had never won more than a few bucks online.

PokerStars awarded 320 Platinum Passes worth $30,000 each ($25,000 for a PSPC ticket and also $5,000 for travel expenses). Many of those lucky winners, including Robionek, were amateurs who got an opportunity to face the pros in a high-stakes tournament, something they may have never been able to experience if not for PokerStars.

And then there Were Eight

Florian Duta from Romania was eliminated in ninth place ($405,000), so the final table is now set. The remaining eight players, which includes two Platinum Pass winners, are all guaranteed at least $509,000. The champion will get a nice cool $5.1 million.

Shakerchi is the only player left with much high-stakes poker experience. He has over $6 million in lifetime cashes and is a regular in high-roller events such as the $300,000 Super High Roller Bowl, which he finished in fourth place last month ($1.18 million).

Shakerchi, founder of Meditor Capital Management, is the only player left who isn’t about to receive life-changing money. Even if he wins the tournament, which pays $5.1 million, he’ll barely notice a difference in his bank account.

But even though he’s beyond wealthy, he loves the game of poker. So, winning this massive field tournament would still be quite an accomplishment.

The final table starts at 1:30 pm ET on Thursday. Fans can watch every hand on a 30-minute delay over at PokerStars’ Twitch channel.

Earn 5 million and make no difference in life. That is to be rich. I followed the broadcast these days. It really is exciting. Unfortunately the representative of Brazil, Pedro Padilha fell in 10th place.

What an end for Shakerchi … Rivera minRaised for 0.5M from HJ with KJs , Martini 3bet for 1.3M from D with AQs (spades) , Jattin folded 77 from the SB after spending a lot of time , Shakerchi moved all in from the BB with Aces . Rivera folded , Martini for half his stack he called . 3K2 rainbow (Kof spades) on the flop , then 10 of spades on the turn , one more spade (5) on the river giving Martini the nut flush/hand .

Most Unfortunate hand for Shakerchi , out 8th for 509.000 . But not bad result at all , especially when he is the wealthier player of all 8 on the FT 🙂