On Day Three at the $25,000 PokerStars Players Championship, the bubble burst, but not for CardsChat Ambassador Jacki Burkhart or former NFL Pro Bowler Evan Mathis. 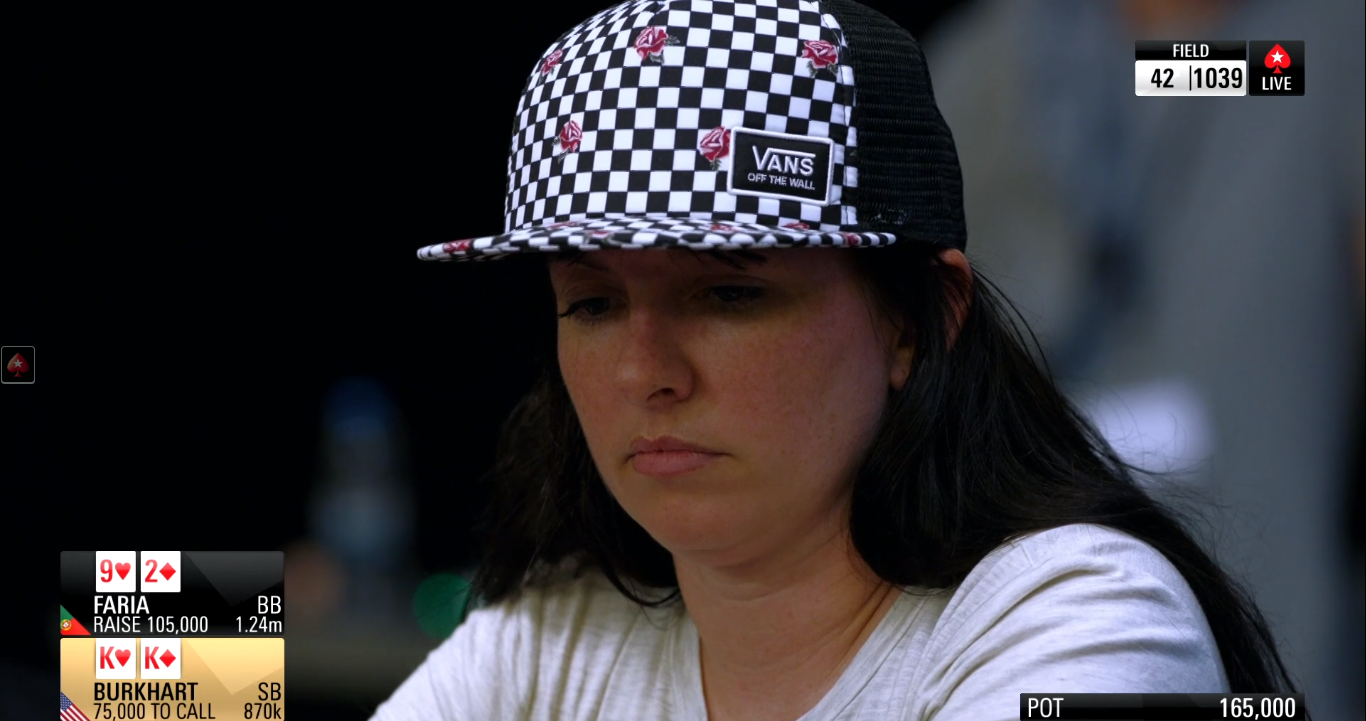 CardsChat forum members will be rooting on fellow poster Jacki Burkhart on Wednesday as she chases a $5.1 million dream in the PokerStars Players Championship. (Image: Twitch)

Only 38 players remain, all of whom are guaranteed at least $86,400. But that amount pales in comparison to the $5.1 million one lucky winner will receive.

Paul Leckey of Ireland certainly didn’t have the luck of the Irish on his side Tuesday. He picked up pocket kings at the most inopportune time.

Leckey ran into Tianle Wang’s aces on the stone-cold bubble and was eliminated in 182nd place. As a consolation prize, however, he received a free entry into the EPT Monte Carlo this coming spring. But that probably won’t eliminate the sting of bubbling one of the most anticipated tournaments in poker history.

Out of the 1,039 entries, 320 players, many of whom are amateurs, received a free Platinum Pass into the PokerStars Players Championship. With 38 left in this historic event, 10 got in without paying. That includes our very own Jacki Burkhart.

Jacki won her pass via author Maria Konnikova’s writing contest. She wrote a brilliant poker story, but will have an even better one to write if she wins the PSPC.

Burkhart made it through Day Three with 660,000 chips, well below average. But she’s only a couple of double-ups away from getting back into contention.

From NFL Champion to Poker Champion?

One of the coolest aspects to the PSPC is the opportunity for amateurs to win millions and run deep in a high-stakes event. Take former NFL offensive lineman Evan Mathis for example.

No matter how much money he earns from this tournament, it won’t be life-changing. After all, he made millions of dollars playing football. But it’s an opportunity for the retired Pro Bowler and Super Bowl champion to prove he can also win big in a game that doesn’t require players to wear pads.

Mathis, who won a Super Bowl with Denver in 2015, left with 910,000 chips following Day Three. Much like Burkhart, he has some work to do if he expects to make the final table.

Who Wants to Be a Millionaire?

The six players who survive Wednesday’s session will become instant millionaires. Each of the final six players are guaranteed at least $1,015,000, with the champion receiving $5.1 million.

Scott Baumstein (4,740,000) holds the chip lead heading into Day Four, which begins at noon ET. You can catch the action on a 30-minute delay on the PokerStars Twitch page.

Nice to see that Jacki is still in it!

This is Amazing this is a historical event hope one day to be part of one like this, I’m so proud that Jacki still on the run common Jacki the best Of luck Hope you can double up your chips and make your way to the final table so exciting tomorrow I will be watching this on twitch