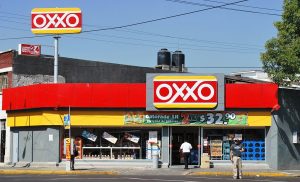 One of the largest brands in Mexico with a network of more than 13,000 stores across the country, OXXO will give PokerStars access to a potential customer base of millions in the coming months.

In fact, in addition to offering a new payment processing option for residents, the partnership will give PokerStars increased branding opportunities within Mexico.

Lack of Banking Options in Mexico

One of the main reasons Mexico has presented a challenge for companies such as PokerStars in recent year is a restrictive banking sector.

Unlike residents of countries with stronger economies, many Mexicans don’t have access to online banking options or credit cards.

This lack of modern banking provisions is something that has posed problems for a number of Mexicans looking to ante-up in the online poker arena.

However, in a bid to overcome such limitations, PokerStars has implemented a system that’s previously proven effective in Europe (Ukash deposits in local stores) and the US (New Jersey residents can make deposits in state-based 7-Eleven stores).

Essentially a voucher system, players in Mexico will now be able to visit their local OXXO store and fund their PokerStars account.

Although it will be somewhat more cumbersome than standard payment options such as Visa or MasterCard, players using OXXO deposits will be afforded a safe way to process funds.

In fact, because the user has to log into their online account and generate a unique voucher code, no money will change hands until the process has been validated by PokerStars, OXXO and the user.

After generating a voucher code, the player must then visit their local OXXO store with a physical copy of the voucher and then pay the cashier the amount shown on said voucher.

At this point the OXXO outlet will notify PokerStars of a successful payment and the cash will then appear in the user’s account within 24 hours.

Another Positive in Mexico for PokerStars

PokerStars’ decision to create a new payment system for Mexican residents is partly based on its desire to penetrate an emerging market.

According to Goldman Sachs, Mexico is a “Next Eleven” country which means it’s predicted to become a leading global economy in the 21st century.

With the average level of wealth gradually increasing across the country, more people now want new ways to spend their disposable income and online gaming looks to be on many people’s wish list.

In fact, with the government currently in the process of regulating the iGaming industry, it’s, therefore, likely that online poker will become a significant enterprise in Mexico by the close of the decade.

Owing to this growth, Amaya, PokerStars parent company, is looking tap into this market now and get ahead of the curve. By making the deposit process as simple as possible for professionals as well as the casual player, PokerStars should be able to establish itself as the market leader over the next five years.