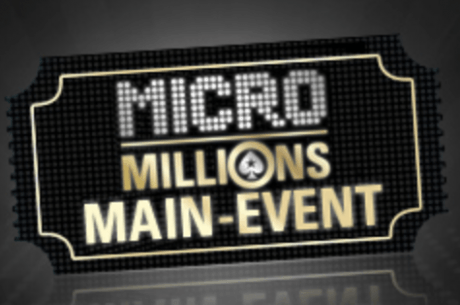 The 11th PokerStars MicroMillions Main Event paid out over $1.1 million in prizes after attracting over 55,000 players. (Image: PokerStars)

PokerStars MicroMillions has never been the highest-profile online tournament series.

After all, as the “Micro” in its name would suggest, the stakes aren’t nearly as high as in the World Championship of Online Poker or SCOOP. But for players who aren’t comfortable putting up hundreds, or even thousands, of dollars for a tournament buy-in, there’s no better event series in which to win a huge prize out of a very small investment.

The biggest tournament in the series was Sunday’s Main Event, which carried the not-so-hefty buy-in of $22. With more than 55,000 players taking part in the tournament there was a prize pool worth more than $1.1 million, giving the competitors plenty of money to play for.

With just five players left, the remaining contestants agreed to a deal that saw all five of them walk away with at least $49,000 in prize money. That led to an unusual-looking payout report, with fifth winning more than fourth, and third claiming a few hundred dollars more than the runner up.

But the winner still took home the lion’s share of the purse, as Canadian player Nolet20 defeated Greece’s SukaPu in heads-up play to take down the Main Event title. Nolet20 won $89,854.68 in prize money for his efforts.

That big prize was enough to make Nolet20 the biggest winner in terms of prize money during the series, but it didn’t impact the final Player of the Series standings. That title went to Ukraine’s malikualutsk, who scored 560 leaderboard points, 60 ahead of Russia’s vanov04.

Malikualutsk won the award without scoring a single win in the series. However, that’s not hard to do when you manage to cash 43 times over the course of the 100 events offered over the ten day festival. That impressive feat earned him the POTS title and a prize package that included 26 tickets to the $215 Sunday Million tournament.

Ultimately, it was Russia that proved to be the dominant force at this year’s series, however. Of the 100 events in the series, 15 were won by Russian players, the most of any country.

MicroMillions Has Run 11 Times Since 2012

The MicroMillions tournament series is advertised as “the richest low-stakes tournaments in poker,” and generally draws massive fields thanks to hosting tournaments that typically only cost a couple dollars (and sometimes even less) to play. But despite the low buy-ins, PokerStars’ massive player base makes these tournaments worth playing, with the total guaranteed prize pool for the series this year being $5 million.

The lowest buy-in tournament in the series was an $0.11 rebuy tournament, which still earned the eventual winner nearly $2,000. Other than the Main Event, all other tournaments featured buy-ins of $11 or less.

This month’s series marked the 11th time that the MicroMillions festival had been held on PokerStars. The first-ever MicroMillions was organized back in March 2012, featuring the 100 event format that has become standard for the series since then.