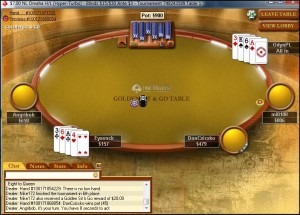 The PokerStars outage impacted some players who were participating in Golden SNG tournaments as part of a recent promotion. (Image: LOLNHDONKWP/TwoPlusTwo.com)

PokerStars has confirmed that players globally experienced issues due to an unexpected network outage on Tuesday, making the market leader the latest poker site to experience connectivity issues in recent weeks. The issues began early in the day and affected several PokerStars sites, including several country-specific versions of the software.

Reports about the outages began around 8:30 am GMT. PokerStars hadn’t shut down entirely, but players began to report issues with logging in and staying connected to their tables. Initially, PokerStars believed the problem to be a routing issue tied to an ISP in the United Kingdom.

However, it soon became obvious that the problem existed far beyond the UK. Players on PokerStars.com, PokerStars.eu, and several of the segregated national PokerStars sites reported similar issues, with reports coming in from around the world. That led to a global server restart from PokerStars, after which the problems seemed to be resolved. All told, the issue only impacted players for about two hours.

That said, the outage was still disruptive, particularly since the servers had to be restarted. While the disruption took place during the morning hours in Europe, minimizing the number of players affected, it did come during the beginning of a promotion to celebrate the company’s one billionth tournament ever.

Like many milestone celebrations at PokerStars, this one has come with Golden SNGs, in which random sit and go tournaments are given boosted payouts. Players in such events were given manually processed refunds.

Larger multi-table tournaments were also affected. Depending on the progress of each MTT, players were either refunded their buy-ins or were awarded payouts based on the number of chips they held when the tournament was interrupted.

While PokerStars is by far the largest poker site in the world, it’s far from the only Internet poker company to suffer connectivity issues over the past month. In late October, partypoker was forced to cancel two events in the Pokerfest series after the company saw disconnections plague players throughout a Sunday afternoon. Once it became clear that the problems weren’t going away, two tournaments with a total guaranteed prize pool of $225,000 were cancelled.

A month earlier, partypoker had similar problems in New Jersey, when several events in the Garden State Super Series were cancelled due to a software issue. That included some of the main events in the series. Officials responded to the issues by adding an additional $50,000 in guarantees to tournaments being held the next week.

In at least one recent case, an online poker site was intentionally disrupted during a major tournament.

Svenska Spel, Sweden’s state-owned gambling company that holds a monopoly on regulated Internet poker in the country, attempted to hold the first event of the 2014 Swedish Masters earlier this month. However, those plans were interrupted by a distributed denial-of-service (DDoS) attack on the poker room.

Over 1,400 players had to be refunded their tournament buy-ins because of the attack, and the company admitted that similar attacks could take place throughout the series.

There have been no widespread disruptions reported since PokerStars restarted their servers. The company’s Golden SNG promotion will award $500,000 in bonus prizes to players as part of the Billionth Tournament Carnival currently ongoing at the site.

Could add to this that 888 connections have been shit lately, especially on weekends….but of course others resolved their’s 888 has happened for the past couple of weekends and is apparently still being investigated

Had a long update today at pokerstars. The problem is fixed I guess. At 888Poker I constantly have connection problem 🙁