PokerStars Kills Off Unpopular Unfold Poker, Could Short Deck Be on Tap?

PokerStars’ latest attempt at innovation will be a short-lived one, as the company is tossing the concept of “Unfold Poker” into the muck. 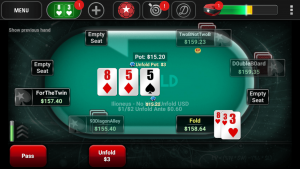 PokerStars had hoped Unfold Poker would be a hit, but not so much. (Source: PokerStars School)

The game variation — which allowed people to pick up and play cards which they had already folded — was only introduced to the international player pool six weeks ago. But after reviewing the early returns, the company has confirmed that Unfold Poker will be removed from its poker client sometime next week.

So much for the variant being a long-term offering, as promised in the initial press release when Unfold Poker was introduced in early August. In fact, the game was met with criticism from the start. Players were unhappy with everything from the increased rake, to the name itself — Unfold’em Hold’em is nothing if not catchier.

“While not every new development will be a home run, we will keep trialing, listening to player feedback and analyzing engagement,” Director of Poker Innovation and Operations Severin Rasset told Pokerfuse.

While the company is chalking this one up to a misstep, its next experiment should be more likely to succeed.

Short Deck Poker, aka Six Plus Hold’em, has quickly become one of the most popular games in the high-stakes live poker scene. Phil Ivey made a splash when he won $605,000 in a Short Deck tournament in Montenegro earlier this year, and indications are that PokerStars will soon be bringing the game to the online realm.

The company hasn’t confirmed it, but graphics files for Short Deck tables have been spotted in recent PokerStars software updates, a clear indication something is in the works.  It wouldn’t be the first poker site to offer Short Deck, as America’s Card Room announced it was bringing the game to the virtual felt this week as well.

For the uninitiated, Short Deck is played the same way as traditional Hold’em, only with all 2s, 3s, 4s, and  5s removed. It leads to some huge hand holdings and plenty of action, which is why it’s become so popular among the high-stakes players.

It can also lead to some extra brain twists, as long-time pro Maurice Hawkins discovered when he missed a straight at the Poker Masters on Tuesday.

Waiting on a Winner

While Short Deck has a good shot at catching on, PokerStars has simply been unable to come up with a popular poker variant of its own. That’s not for lack of trying.

Earlier this year, the company introduced Split Hold’em, a game which featured two full boards of community cards. That game never caught on and only lasted a few months.

In May, it was replaced by another novelty game called “Showtime Hold’em,” where players were forced to show every hand they had folded. That game was also killed in late July, and the next week PokerStars introduced Unfold Poker, which suffered the same short-lived fate.

This short deck thing seems intresting.
I hope they will make it happen 🙂