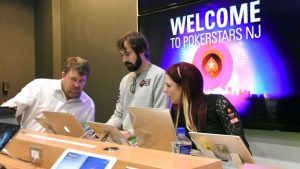 PokerStars has helped New Jersey post a record month for online gaming in March, despite being in full operation for just the last ten days of the month.

According to figures just released by the New Jersey Division of Gaming Enforcement (DGE), total online poker revenue for March was $2.46 million, of which $598,000 was raked by PokerStars.

In all, the online poker vertical was up by 10.5 percent compared to the same period last year, representing its first year-on-year growth since November 2015. It was also up 25 percent for the preceding month.

PokerStars’ long-awaited return to the US saw it overtake its competitors in terms of player liquidity on its first full day when traffic across all tables surpassed the 1,000 mark. Since then it has supplanted Party-Borgata and WSOP-888 in the traffic rankings on a regular basis, although not quite as spectacularly as that first day, with a seven-day average of around 150 players, according to PokerScout.com at the time of writing.

Party-Borgata remained the top card in the deck, however, having had the advantage of 21 extra days of operation over PokerStars during the month. Its total haul was down only slightly from February, to $1.03 million. February, of course, has fewer days than March, which suggests that the cannibalization of its players by PokerStars could prove to be greater than it currently appears.

The picture of how PokerStars’ entrance to the market has affected Party-Borgata’s market share will become clearer when we see the DGE figures for April in a month’s time.

PokerStars is also planning a New Jersey version of its Spring Championship of Online Poker in May, which is likely to attract more players to jump ship.

Total online gaming revenue including casino games saw growth of 18 percent year on year, to $15.51 million. This is also an increase of 6 percent on February, which had been itself a record month.

When you adjust for the extra two days in March, though, there is actually a slight month-on-month decrease in performance, which perhaps is to be expected as the weather improves and poker players emerge from their winter hibernation blinking in the sunlight.

Borgata still holds the top spot for overall gaming revenue, with $4.23 million and a 27 percent share of the market, while Tropicana narrowly edged out Caesars-888. A four percent growth spurt for the month, meanwhile, saw the Tropicana’s revenues climb to $3.17 million, for roughly a 24 percent share.

And while Atlantic City itself teeters on the verge of financial meltdown, its beleaguered land-based casino are somehow keeping things together. For the year-to-date, revenues from the casino floor totaled $552.9 million through March 2016, compared to $544.7 million in the prior period, an increase of 1.5 percent, said the DGE.