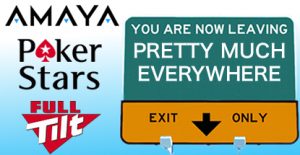 PokerStars, along with Full Tilt, has announced its withdrawal from gray markets in Asia, Africa and the Middle East. (Image: calvinayre.com)

PokerStars has ended its operations in several so-called “gray markets,” in a move that may have been prompted by upcoming changes to the licensing and regulation process in the United Kingdom. The poker site was joined by Full Tilt, with both Amaya Gaming-owned poker companies announcing the withdrawal on Tuesday.

“Our management team regularly reviews our operation along with independent 3rd party professionals to assess the business risk and opportunities for our brand on a market-by-market basis,” said a message to players in the PokerStars client. “Following our most recent review, it was determined that we would no longer offer real money games in your country.”

The exit does not appear to impact all gray markets, and an official list of jurisdictions that the sites are exiting from has yet to be provided. However, it has been reported that nations including Bangladesh, Egypt, Iran, Iraq, Kenya, Malaysia, Nigeria, North Korea, Saudi Arabia, Turkey and Vatican City were among those that are no longer allowed to play on PokerStars or Full Tilt for real money. In general, the affected nations appeared to be concentrated in Africa, Asia and the Middle East, with a couple of notable exceptions (including Cuba).

However, there was one notable gray market that was not affected: Canada. While several other companies, including Ladbrokes, have announced recently that they will no longer offer online poker in Canada, Amaya has said it’s committed to the market. The company is currently seeking a path to licensing in Quebec.

Jurisdictions are typically considered “gray markets” if they do not have express prohibitions against online poker, but also do not have a licensing or regulatory framework for the game. That makes the legal designation for online poker and Internet casino games in these nations unclear for operators.

Historically, that’s been enough for most firms to offer poker and other games in these countries, backing off only if governments threaten or undertake legal action against them. However, the new UK Gambling (Licensing and Advertising) Act has given online poker companies a reason to reconsider their operations in at least some of these jurisdictions.

Under the new laws, operators who have significant operations in gray market territories must be able to legally justify their presence in those nations if they want to be licensed in the UK. While the bill has been delayed from its initial October 1 date, it is still expected to go into effect next month.

In the case of PokerStars and Full Tilt, most of these nations likely fell below the 3 percent of operations threshold required until the UK licensing regime. However, Amaya may also be trying to improve the overall regulatory reputation of its brands in advance of a potential return to the United States. Such a return could occur as soon as later this year in New Jersey.

As has been the case with PokerStars in the past, it appears that the cash out process for affected players will be painless, with players welcome to withdraw their funds “at their convenience.” Players also appear to be able to cash in tournament tickets and spend their Frequent Player Points (FPPs) before cashing out.