PokerStars Explains Its Turn Away from Serious Players as Revenues Shift

PokerStars needed to become more entertaining to the masses, Stars Group CEO Rafi Ashkenazi said, which is why his company has shifted its focus away from efforts that appeal to skilled players. 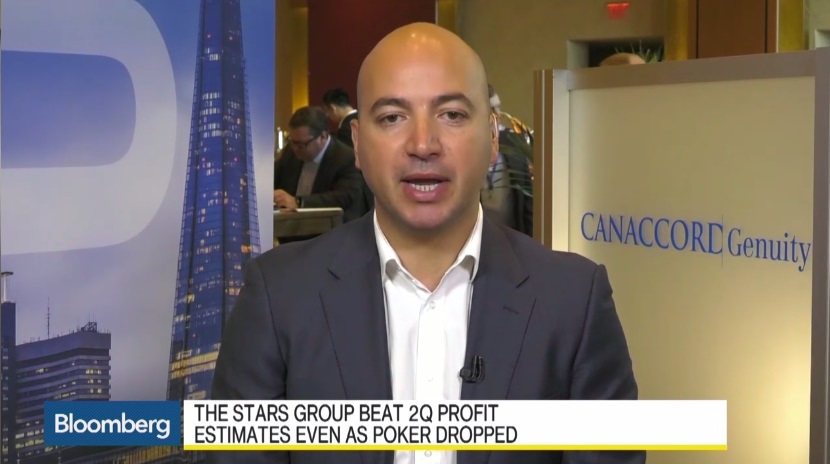 Speaking to Bloomberg in his first TV interview since taking charge of the recently renamed The Stars Group (formerly Amaya), Ashkenazi explained that he’s currently sizing up merger and acquisition opportunities. With cash flow in a positive realm, Ashkenazi believes the company is ready to expand, but not necessarily in a way that some PokerStars loyalists might want or expect.

In analyzing the current situation at PokerStars, Ashkenazi said that the average player doesn’t want to face off against seasoned grinders. They instead, he said, “want to enjoy the game as a fun entertainment experience that offers many winning moments and the dream of the big payout.”

The Stars Group Director of Operations and Innovation Severin Rasset echoed that sentiment.

“We were starting to have too many professional players for what we could maintain for a good, healthy ecosystem,” Rasset said of the company’s latest revenue report, which was released on Wednesday.

Rasset joined the company in August 2015 with a background in video games and an awareness of how “professionals” could be harming a sense of player balance at PokerStars.

The news of this shift in outlook won’t come as much of a shock to longtime PokerStars players. When Amaya took over in 2014, a few subtle yet significant changes started to become apparent.

For one, the introduction of Spin & Go tournaments seemed to be a way to protect fish from proverbial sharks. The removal of sponsored pros at PokerStars’ sister site Full Tilt also supported a new approach, and the reduction of Supernova Elite rewards by 5 percent also took place in 2014.

For the first time in PokerStars’ history, the most loyal players seemed to be getting short shrift.

Such changes would be compounded by a rake increase that pro player Mike McDonald described as an attack on the skill aspect of poker.

“Spend years branding poker as a skill game. Analyze win rates of top players. Set rake to be slightly more. Our job is now a carnival game,” McDonald tweeted in 2014.

In an effort to stem the tide of changes, players across three popular poker forums organized a protest in late 2014 where they took seats at PokerStars table then elected to sit out, effectively closing down the games temporarily.

But that didn’t stop Stars from making additional changes, and moving their attention to non-poker endeavors.

As their Q2 financial reports indicated, the Stars Group is now drawing an ever-decreasing amount of revenue from its poker asset, PokerStars.

According to the report, poker revenue for Q2 of 2017 was down 5.9 percent year-on-year. More significantly, 66.5 percent of the company’s total revenue for the period came from poker, which is down from 75.5 percent compared to 2016.

Despite the drop in poker revenue, PokerStars’ total revenue for Q2 was up 6.8 percent, while new sign-ups increased by 2.1 million. The figures seem to support the new direction PokerStars is heading, even if the rebalancing of skill levels could upset the “pro” poker players.

Interesting, but other than the last couple of paras, this article is all old (2014) news, which means that it’s not news at all.