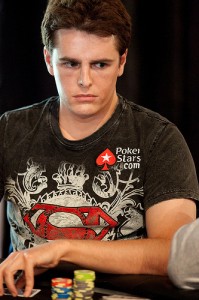 Dale Philip – AKA “Daleroxxu” – showed jubilation at Holland’s destruction of Spain in the World Cup and cost him his PokerStars sponsorship. (Image: fulltiltpoker.com)

“Just been dropped from PokerStars for the goal celebration against Spain. Not the best news before an 11 hour flight,” tweeted Dale “Daleroxxu” Philip, as he prepared to board a plane for his home in Thailand. Many of his Twitter followers thought he was joking, at first – after all, Philip is well-known for his devilish sense of humor, which he injects effortlessly into his poker blogs. And the reason he became a member of Team PokerStars online in the first place was as much for an elegant turn of phrase as his online poker prowess.

He’s pretty much the best poker blogger out there: he’s been nominated multiple times as Best Blogger at the British Poker Awards; he once undertook a personal “Tour of Cards” challenge, visiting 52 countries in as many weeks, playing as much poker as possible, and blogging all the way. Hell, he even won the PokerStars World Blogger Championship of Online Poker (WBCOOP) Main Event against a field of 2,247, which pretty much assures his status as the best blogger in the world.

However, he was not joking, and nor was PokerStars. Philip’s gloating at the reigning champions’ defeat against the Dutch last week was apparently beyond the pale. We kind of understand. Everyone was shocked. Against all expectations, the Dutch pulled the Spanish to pieces. From the moment Robin Van Persie’s beautiful diving header sailed into the top corner to equalize in the 44th minute, to the moment the same man made it 5-1 in the 72nd against the hitherto most dominant team in modern soccer bar none, we all stood there in disbelief, mouths agape.

It seems, however, that Philip’s celebrations went a little too far, and this is silly for the following three reasons:

A) He was at the PokerStars UKIPT in Marbella, Spain, at the time, therefore we fear he may have upset local sensibilities.

B) He’s Scottish, so it shouldn’t really matter to him that much.

C) He was in Spain as a representative of Team PokerStars Online and he’s supposed to be, like, their ambassador.

We can only imagine the whackiness of Philip’s celebrations, and we’re sure they were conducted purely in the spirit of fun and hijinks, but hey, this is this the World Cup! People get really, really upset about losses. And the Spanish are not as used to losing as the Scottish, remember.

This was apparent during the Twitter war that followed between Philip and Spanish poker player, Alex Hernando, who was present at the tournament, during the match.

“Insulting me and threatening me on Twitter when you are 10 metres away from me is ridonkulous,” said Philip, now realizing that he may have gone a bit too far. “Just a game, cheer up and let’s be friends.”

Hernando was having none of it, though: “Maybe you should think about the patch u were wearing,” he said. “I’m 200% sure that PS would not stand your ‘celebration moves.’ ”

Oh dear. Talk about a cultural misunderstanding! We must say, though, that although PokerStars has new owners to impress and all that, we think they may have gone a little too far in this instance, and the UK poker community was aghast at the severity of the punishment heaped on Philip.

“Unless you did a Nazi salute or genuinely tried to start a fight, I think you got shafted there man,” said one.

While we’re not sure what that means, we can gather the tone of it. And we only hope, Mr. Hernando, that a man losing his job eases the pain of that 5-1 ass-whupping Spain took at the hands of Holland. Because it really, really must have hurt.

I seen the video, Dale was dealt a bad beat, and considering the threats made to him days after the fact and still to this day, I feel his VIP Stars Manager Chris, wont name last names; should really have made more of an effort to help his cause.

I really think there is more to this, Poker Stars insiders have hinted to me recently they have been wanting a change, and this is just being used IMO as a reason to cut him finally!

Sorry Dale but your time is up :p