The new look PokerStars Championship series in the hot and sunny Bahamas got underway on Friday. Previously the PokerStars Caribbean Adventure, the series will conclude January 14th following a host of exciting poker tournaments. 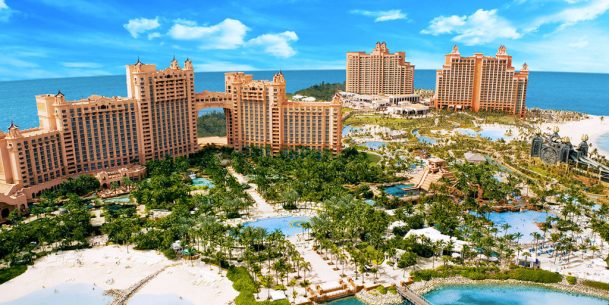 The 2017 PokerStars Championship at Atlantis Resort in Nassau, Bahamas kicks off on Friday. (Image: Marriott.com)

Hundreds of poker players from around the world have descended upon Nassau for eight days of sun, beaches, and stacking chips. In case you’re stuck in a frigid cold climate while your poker buddies are out in the Bahamas, you’ll be glad (or jealous?) to know that they can expect temperatures approaching 80 degrees daily.

The poker action should be hot as well. It all kicks off Friday with the $100,000 buy-in PokerStars Championship Super High Roller. This is a three-day event. Players such as Daniel Negreanu have been eagerly awaiting this one.

There are 10 additional tournaments at the sun-drenched Atlantis Resort on the first day. That includes a late-night (10:00 pm local time) $10,200 buy-in Hyper Turbo event. The series also features numerous low stakes tournaments ranging from $110 to $1,000.

On January 8, the $5,000 Main Event begins. Day One will conclude the following day. Day Two takes place January 10. Four days later, we’ll have our final table and a champion.

The first winner in tournament history was Gus Hansen in 2004 ($455,780). The Great Dane only won back a portion of the almost $21 million he’s lost online in his career. Other notable past winners in the tournament now referred to as the PokerStars Championship include John Gale (2004) and Bertrand “ElkY” Grospellier (2008).

ElkY also has a High Roller win at the PCA in 2009. He joins a long list of respected pros with High Roller and Super High Roller wins. A list that includes Vanessa Selbst, Scott Seiver, Brynn Kenney, Viktor Blom, and Steve O’Dwyer.

The PokerStars Championship is an eight-day series of 92 poker tournaments. Each day, there will be events for the low and high stakes players.

Other key events we haven’t mentioned are as follows: