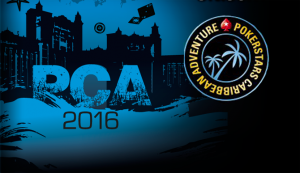 The first weekend of the 2016 PokerStars Caribbean Adventure series (PCA) brought both exciting and disturbing moments.

In the latter category, Antonio Esfandiari, one of the game’s most popular players, created a makeshift toilet at the poker table. When he couldn’t hold it in any longer during a $5,300 PLO tournament, he decided to “go” in a cup under the table.

The Magician’s behavior got him disqualified from the event for doing what many players in the WSOP Colossus event last year likely considered when bathroom lines became excessively lengthy. For more on that fluid story, check out our special assignment report on today’s CardsChat.

But Esfandiari wasn’t the only poker star making headlines this weekend in the Bahamas. A WSOP champ got heads-up in a high-roller event, and another big name won a major event.

Joe McKeehen pulled off one of the most dominating performances ever at the WSOP Main Event final table in November. Until getting heads-up with Bryn Kenney in the $100,000 Super High Roller event at the PCA on Friday, McKeehen appeared to be on his way to another title.

When heads-up play began, Kenney held a slight chip lead over the world champion. But that lead quickly deteriorated and Kenney found himself down to just 10 big blinds at one point.

After a series of double-ups, Kenney took a commanding lead, which held up, giving him the tournament title and the $1,687,800 that goes with it. That money put Kenney over $8 million in lifetime live tournament winnings, good for 51st of all time as of this writing.

Although McKeehen fell short of winning the event, he did surpass $11 million in career winnings after taking home $1,220,840 for second place.

O’Dwyer took down the $50,000 single-day hold’em event on Saturday. First was to pay $945,495. For most poker players, that’s 10 times more than what they make at the tables in a lifetime. For O’Dwyer, that isn’t even 10 percent of his career earnings.

Winning high roller poker tournaments is almost becoming a broken record for the Colorado native. His current 14-month stretch is one of the most impressive runs in poker history.

During that time period, O’Dwyer has nine scores of six figures or more, including seven tournament titles.

Connor Drinan, another successful high-stakes pro, finished 2nd. Brynn Kenney (7th) and Isaac Haxton (4th) followed up their deep runs in the $100,000 event the day before with another impressive run.

The PCA Main Event, a $5,300 buy-in tournament, also began on Friday. It is scheduled to conclude on Wednesday.