PokerStars is expanding its live tournament offerings by launching a US version of its low-stakes MEGASTACK series. (Emphasis theirs.) 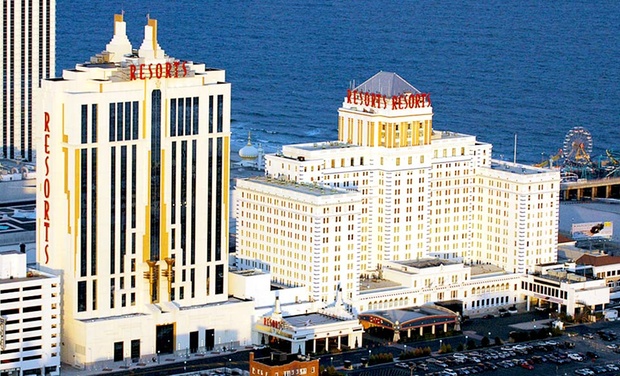 The Resorts Casino in Atlantic City will be home to PokerStars NJ’s inaugural Megastack tournament series, which promises to show exactly how well online poker can do at bringing live players into partner establishiments. (Image: Groupon)

PokerStars NJ went live in New Jersey in March 2016, and since then has been locked in a battle for supremacy with WSOP/888 NJ. In a bid to increase its profile and bring more live players to the online arena, PokerStars is now launching its Megastack tournament events in the US, offering a live-action complement to its Sunday online lineup.

From Online to Brick and Mortar

PokerStars introduced the Megastack concept in London in April, with a £170 ($220) event at the Hippodrome Casino. The offer is a pro-level experience in terms of action for small-stakes players. More specifically, they are promising “PokerStars Champion-like” structures at a “fraction of the cost.”

For the New Jersey version of Megastack, the first real cards will go in the air on October 6, at Resorts Casino Hotel, and will run all weekend through October 8. In a nod to PokerStars NJ’s most popular weekly tournament, the $50,000 Sunday Special, the US Megastack tournament will be called the Sunday Special Live.

To help strengthen the connection between internet play and the new live tournaments, online satellites will run on PokerStars NJ with buy-ins as low as $0.50.

PokerStars NJ’s regular action usually averages about 110 players throughout the week. Their competitors WSOP and 888, who share player liquidity, usually draw 130 players at any given time. The hope is that by having a live, visible event, the US-based Megastack series will also help promote additional online play.

Since New Jersey opened its virtual doors to online poker rooms in 2013, regulators have insisted on cooperation between online licensees and brick-and-mortar casinos. For necessary legislation to pass, the state’s Division of Gaming Enforcement (DGE) had to assure live casinos that online offerings wouldn’t cannibalize their action.

The latest move by PokerStars and Resorts Hotel Casino should do well to show that online and live play can fuel each other in New Jersey. The inaugural Megastack in New Jersey stands to be another seismic shift in the online gaming landscape. The first such event in London drew 526 players, providing a benchmark for the next local version of the tournament series.

October stands to give players a taste of high-stakes action that for years they’ve followed on TV and online. And for New Jersey’s still emergent gaming industry, it will likeluy show just how well online poker and live casinos can mix.