Israel is often accused of taking strong stands on a variety of political issues, but iGambling, it turns out, remains in the “unresolved” category for the Middle Eastern nation. 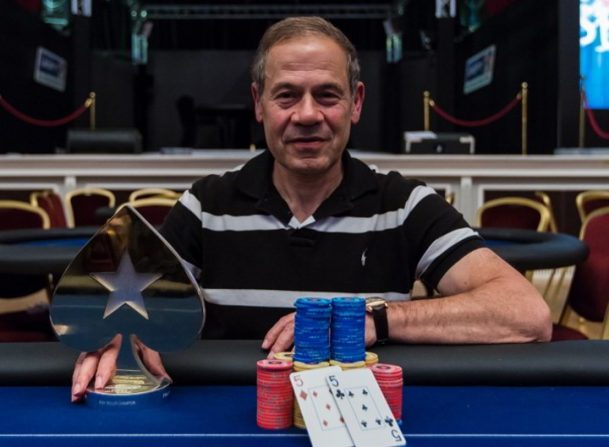 Israeli-Canadian Isai Scheinberg (shown here after winning the UKIPT Isle of Man High Roller in 2014) built the code that would become PokerStars while he was still working for IBM in Canada. PokerStars announced on Monday it would no longer serve Israel’s online gaming audience due to gray market concerns. (Image: f5poker.com)

Given that reality, PokerStars made the decision to cease offering real-money poker games to the Israeli market as of Monday, June 27.

Israeli players were notified of the situation suddenly over the weekend via email, along with assurances that their balances would be protected and available for withdrawal at their convenience.

The move is likely to be related to increased pressure recently from the country’s banking regulator on financial institutions, demanding they stop processing online gambling transactions. In fact, it’s very reminiscent of America’s own unravelling in the online gaming arena prior to 2011.

“Our management team regularly reviews our operations market-by-market to assess commercial opportunities and business risks for our brands,” read the email. “Following a recent review, we regret to inform you that we have decided to stop offering real money games to players who are physically located in, or have a registered address in, Israel [as of] June 27, 2016.”

Israel is a classic case of a gray market. While almost all gaming, apart from the national lottery and sports and horserace betting, are prohibited, it has no law that specifically prohibits online gambling per se. The National Lottery organization is licensed to operate lotteries and scratch cards sold from brick-and-mortar locations, but not online, while the Israeli Sports Betting Board provides limited online and land-based betting.

Then last December, the Jerusalem District Court ruled that Texas Hold’em was against the law. This was in response to an appeal from a woman whose husband had been sentenced to probation and fined for hosting high stakes home games. The ruling, as is also generally the bone of contention in the US, was over the “skill vs. luck” factor, with the judge landing on the “luck” side of the equation.

Even had poker been accepted by the court to be a game of skill, it may still have been ruled to be illegal. Uniquely, according to Israeli law, a competition does not require a player stake to be classed as “gambling,” which means, at least theoretically, any game with a prize could be deemed to be illegal.

Israel has a strong connection with online gambling companies. Many of the industry’s pioneers, such as the founders of Playtech and 888, were Israeli nationals, and several Internet gaming operators still have offices in the country. And notably, PokerStars’ own founder, Isai Scheinberg, was an Israeli senior programmer for IBM Canada when he built the code that would become the PokerStars platform.

PokerStars said that all outstanding tournament tickets held by Israeli players would be converted into cash for withdrawal. Meanwhile, players who had made progress on their current VIP Step will receive the full prorated value of their current Step credited, if the amount is 250 StarsCoin or more.

“We apologize for this inconvenience and hope you’ve enjoyed your experience; we invite you to continue playing with your existing account on our play money site here,” concluded the email in a message that might not be received with much joy by Israel’s online poker community.