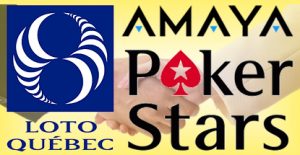 With Amaya Gaming’s recent acquisition of PokerStars, a new window of opportunity has opened for the online giant to go legal in Canada. (Image: calvinayre.com)

Canadian Amaya Gaming’s recent takeover of online giant PokerStars for $4.9 billion is already causing some quakes in the Internet poker universe – particularly on the purchaser’s motherland soil. Loto-Québec, the official lottery agency of that province, has begun talks with operators of international online poker sites, with a special interest in PokerStars now that Amaya’s purchase has given it a fresh start in the eyes of regulators.

Part of the opportunity that the new Amaya and PokerStars alliance promised was to open up new markets previously murky to the company and most specifically, in the United States and Canada. Now, it appears that PokerStars might be remaining in the province of Quebec without any legal hassle. Marie-Claude Rivet, a spokesperson for Loto-Québec, told the Huffington Post that in respect to current Canadian Criminal Codes, they are looking into offering sites like PokerStars a license in return for income.

It comes as no surprise to many industry analysts that Amaya would immediately open doors for PokerStars. Amaya Gaming just happens to be located in Quebec as well, and Loto-Québec has not seen the return it promised to bring in, as profits were down in 2013 by 10.5 percent and with it, the corporation’s dividends.

Currently, many international sites operate in Canada, and specifically in Quebec, without official authority to do so. Rivet conceded that Loto-Québec accounts for only a small share of online casino games used by players in the province.

The good news for PokerStars fans is that Amaya and Loto-Québec already have a working relationship. The company is an existing provider of devices for casinos and has been for a number of years, in addition to supplying gaming technology for LQ’s online gaming site, known as EspaceJeux.com.

Rivet stated, however, that talks with Amaya are “still in their infancy,” and not very advanced at this time. Given that the two companies are located in the same province, already have an ongoing working relationship, and are starting to talk to each other, it stands to reason that a deal might get done fairly quickly.

Current Climate in Quebec and Canada

As of now, EspaceJeux.com is the sole online gambling site that is licensed by the province to offer both online poker and casino games. While it has a legal monopoly, the company has struggled greatly to combat fierce international competition. According to the company’s last fiscal year report, the site generated $26 million in revenue, well short of expectations. Although this figure does represent an 11 percent gain from the previous year, many believe the market in Quebec to be worth much more. The site shares poker liquidity on the Canadian Poker Network with the western province of British Columbia.

What Comes Next for PokerStars

There is still plenty to figure out in wake of the deal between PokerStars and Amaya. It was widely believed that the acquisition would fast-track the world’s most popular online poker site, along with Full Tilt Poker, to get licenses in Canada and in the United States, where online gaming is in its regulatory infancy. It stands to reason that if PokerStars can enter the province of Quebec rather quickly, as it should, it might have the footing it needs to get into its long-desired state of New Jersey. Should California come to also allow regulated online poker, PokerStars already has a deal in place as well, with the recent acquisition helping to smooth over any potential “bad actor” roadblocks the company might encounter.