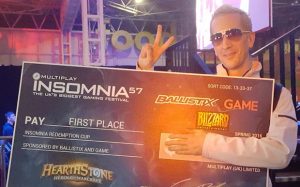 Bertrand Grospellier who recently rediscovered his passion for eSports is already a member of Team Liquid. (Image: PokerListings.com)

PokerStars has inked a sponsorship agreement with leading eSports outfit Team Liquid, a deal that will seek to exploit the crossovers and synergies between poker and competitive video-gaming.

Under the terms of the agreement, several of Team Liquid’s “cyber athletes” will take part in PokerStars-sponsored events and promote online poker to new audiences via their Twitch channels.

While the popularity of online poker has declined in recent years, eSports is on the up. Professional video gaming is set to become a $1.9 billion industry by 2018, according to predictions by analysts SuperData, and the gambling industry, from online poker sites like PokerStars to the land-based casinos of Las Vegas, are eager to tap the new trend and its younger demographic.

While this is PokerStars’ first foray into the world of eSports, its sister site Full Tilt recently announced that it had become the sponsor of the G2 Esports Hearthstone Team. Hearthstone is a strategic digital card game set in the World of Warcraft universe. In the two years since its release, the game has accrued over 40 million registered users, more than half the user-base PokerStars has been building over the past 15 years.

ElkY recently made a return to eSports, signing up with Team Liquid in November last year. Last March, he bagged his first-ever Hearthstone tournament, winning the Redemption Cup at the Insomnia Truesilver Championship in Birmingham, UK.

“I’m happy to announce that I’ll be streaming poker under the PokerStars flag,” said Mikkonen. “I used to play a lot before I started my eSports career and it’s a very interesting and complex game. If you want to see an old poker player relearn the game, tune into my stream.

“I’m no stranger to the game. I used to play a lot in the past. PokerStars is the most respected and reliable company in that business, so I’m super excited to be sponsored by them.”

While Mikkonen and Brusi are old hands, Wünsch will be learning from scratch, and viewers will be able to watch his trials and tribulations on his Twitch TV stream.