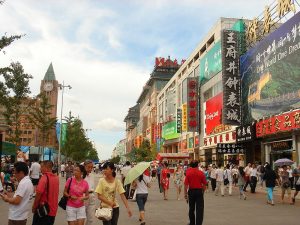 PokerStars and the Asia Pacific Poker Tour are set to make their first foray onto the Chinese mainland with the inaugural Beijing Millions, scheduled for July 18th to 27th, at the Beijing Star Poker Club. The event will be a ¥3,000 buy-in (US$480) tournament, and while details of the structure are yet to be released, it’s expected to be similar in nature to the 2014 Macau Millions.

That event offered several Day Ones, with the day ending only when seven percent of the field remained. That seven percent automatically qualified for day two and were in the money. Players were permitted to enter as many Day Ones as they wished, with only the largest chip-stack from each flight taken into Day Two, but a bonus cash prize was awarded for each additional stack that qualified for Day Two.

Poker as a Sport

It’s understood that the Beijing Millions will incorporate six Day One flights, with a possible seventh added should demand for the final flight exceed capacity.

While poker festivals of this size in the People’s Republic of China have been rare, they are not unprecedented. In 2012 and 2013, the WPT held a US$1,500 event in Sanya, on the island of Hainan. While gambling is illegal outside the semi-autonomous enclaves of Macau and Hong Kong – a law that is rigorously enforced and harshly punished – poker tournaments are promoted by their organizers as “mind sports.”

In 2012, the General Administration of Sport of China permitted the holding of poker tournaments in Hubei Province, which surrounds Beijing. Poker clubs in Hubei are thus under the management of the sporting governing body.

However, while the government appears to have a reasonably liberal attitude towards poker, its authoritarian nature was apparent during the WPT events, when strong restrictions were imposed on live reporting from the tournament, and photography and video were banned inside the casino.

Nevertheless, it’s clear that the appetite for poker is huge in China. East Asia is currently witnessing a bona fide poker boom, as evidenced by the recent Macau Millions. Of the record-breaking field of 1,804, 629 players were from China: roughly 35 percent.
Meanwhile, live online satellites have already begun on PokerStars, and APPT head honcho Danny McDonagh took to Twitter to express his delight at the level of enthusiasm for the event: “What a massive first satellite for the Beijing Millions just started,” he said. “Well over 100 runners. Not seen this level of interest ever before in Asia Pacific.”