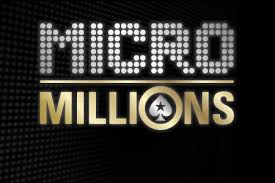 Buy-ins for the side events range from $0.11 to $11, climbing to a whopping $22 for the Main Event. It’s no laughing matter, though; that the event comes with a $1 million guaranteed prize pool.

Meanwhile, the MicroMillions Tournament Leader Board will be awarding additional prizes for players who score the most points across the series.

Players will earn points for cashing in scheduled tournaments, with the overall winner crowned MicroMillions “Player of the Series,” and they will win Free Sunday Million tickets for six months (that’s 26 $215 entry fees!).

Naturally, satellites for seats are up and running now at even more microscopic stakes.

“We believe Amaya is better positioned longer term to generate more cash with less cost in launching a fantasy sports business than the two major fantasy sports operators edging toward IPOs,” declared the site. “With a reported 68 million registered users in poker, already available in 30 languages and a market cap of $3.66 billion (US), we like their potential positioning against newly minted DraftKings and FanDuel shares when they become public companies.”

Seeking Alpha discouraged investors from buying shares in fantasy sports companies when they could be putting their money behind Amaya, which it sees as a “strong possibility for a far better bet on bigger gains.”

More Attractive than Poker in US

“Amaya’s 2014 revenues reached $668.2 million, mostly from its $4.9 billion 2014 acquisition of PokerStars and Full Tilt. EBITDA was $292.7 million,” it said. “CEO David Baazov has targeted 2015 revenues to reach $1 billion out of all current platforms. A move into fantasy sports would ride perfectly on the back of the Toronto-based company’s current business model.”

Fantasy sports could be even more attractive to Amaya than poker in the US because the company wouldn’t have to suffer the agonizingly protracted process of state-by-state legalization and regulation.

“The noise generated by such an entry can quickly move the shares north with far less risk than newer players in the space if it turns out the business is a lot smaller than some of the present moonstruck forecasts we’ve seen,” said Seeking Alpha.