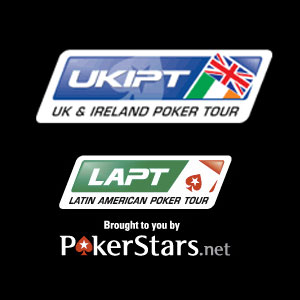 PokerStars reveals the 2014 dates for its Latin American Poker Tour and UK & Ireland Poker Tour, both kicking off new seasons and tour stops for the new year.

As 2013 came to a close, so did several seasons of PokerStars’ popular poker tours. But players need not fret, as the UK & Ireland Poker Tour and Latin American Poker Tour each announced new tour stops for 2014, complete with tour stop information and dates. Players can begin their travel planning early and start looking for satellites on PokerStars.

On December 23, PokerStars announced that the UKIPT will extend its fourth season into 2014. The poker tour has gained a great deal of popularity in the UK and Ireland for its low buy-in tournaments at various locations, with some even boasting of prize pool guarantees.

Season 4 of the UKIPT began in April of 2013 with a Series 1 stop in London and continued on through the beginning of December with a stop in Nottingham, England. Six more stops have been added to extend the season into 2014, all starting January 16-20 in Edinburgh, Scotland. The Assembly Rooms will host the tournaments, which will include a £1,100 buy-in No Limit Hold’em Main Event with a £500K guarantee.

And by popular demand, the Isle of Man will again host a UKIPT stop with a lowered buy-in of £770 and a guarantee of £350K in winnings. Dates for the Isle of Man stop have yet to be announced; neither have the dates and tournament information for the season-ending stop in London.

All stops will offer a number of low buy-in tournaments in addition to the Main Event in each city.

The news continued in the last few days of December when PokerStars announced a new 2014 season for its growing Latin American Poker Tour.

Season 7 will begin in conjunction with the European Poker Tour for the PokerStars Caribbean Adventure. The tour continues in the popular Enjoy Casino and Resort in Vina del Mar, Chile. Players can gather in mid-March for the series of tournaments. The $1,700 buy-in NLHE Main Event will offer unlimited reentries and run March 19-23.

From there, action moves to Sao Paulo, Brazil for a series of tournaments to be held in partnership with the Brazil Series of Poker. The Holiday Inn Anhembi will host the events, which will culminate in the R$4,400 buy-in NLHE Main Event from May 30 to June 3. Panama City will host the next stop, and the LAPT Panama will be held at the Veneto Wyndham Grand Hotel and Casino from July 23-27. The $1,700 Main Event will offer unlimited reentries.

Another stop is scheduled from September 10-14 with a $1,700 buy-in, but the location has yet to be announced. After that, the LAPT heads to Lima, Peru and the Atlantic City Casino for the series and the $1,700 Main Event from October 15-19. The event will also offer unlimited reentries for players.

The LAPT Grand Final of the season boasts of a return to Punta del Este, Uruguay. The Mantra Resort, Spa and Casino will offer a number of tournament options, including the $3,000 buy-in NLHE Main Event from November 26-30 with unlimited reentries.

The final numbers for Season 6 of the LAPT showed more than $9.7 million awarded to players. More than 4,000 players participated in the Main Event, with approximately one quarter of them qualifying online at PokerStars. Players hailed from 62 countries and the number of unique players rose 25% from the previous year.