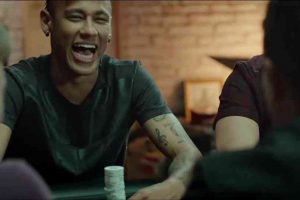 Neymar Junior is one of the world’s brightest young athletes. That’s why PokerStars signed him on, along with fellow soccer star Cristiano Ronaldo, to be a brand ambassador last year.

At just 23 years old, Neymar has achieved a great deal of fame and adulation, and made millions of dollars to boot. But some of that money is now in jeopardy.

According to his home country of Brazil, the soccer star owes approximately $47,000 and his father, of the same name, owes just over $67,000 in fines levied for unpaid taxes dating back to 2007. The elder Neymar is on the hook for his share due to his son being a minor at the time.

Neymar’s lawyers told Brazilian website UOL they will appeal the court’s decision. He was originally ordered to pay the fine in 2012, but the father filed an appeal in 2014. Following his appeal, the federal courts in Sao Paolo have now decided the original fine was correct.

Neymar’s tax burden doesn’t stop with the aforementioned fine. The court also said the athlete has evaded paying nearly $16 million in taxes from 2011-2013.

Due to non-payment, Brazil froze approximately $48 million of his assets last September. The judge froze three times the amount he allegedly owes. Neymar has long disputed this debt. In 2013, Neymar switched soccer teams from Brazilian club Santos to FC Barcelona in Spain. At the time, Neymar was projected to become one of the greatest soccer stars ever, and he hasn’t disappointed his multitude of fans and legions of social media followers in that regard.

Any UEFA Champions League team would benefit greatly from having a player of his caliber. To acquire Neymar, the Barcelona organization was forced to pay a transfer fee, which has led to an ongoing dispute in Spain courts.

A Spanish court claims that FC Barcelona club president Josep Bartomeu and his predecessor Sandro Rosell evaded millions in taxes after signing Neymar from Santos. Neymar and his father are scheduled to testify in a Spanish court regarding this issue on February 2nd.

Soccer isn’t the only game where Neymar gets his kicks. His love of poker landed him a gig as a PokerStars brand ambassador. Following his acceptance of this designation last May, the poker hobbyist had this to say:

“Growing up and playing [soccer] everyday has made me a competitive person. When I’m not playing [soccer], playing poker and competing against my teammates on the road or in home games with friends is one of my favorite things to do.”