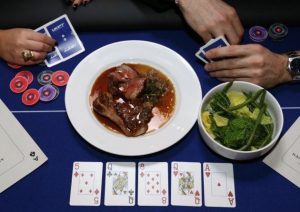 PokerStars is offering you the chance to play poker for your dinner. All-in kitchen will pop up in Bristol, UK, next month. (Image: london24.com)

PokerStars’ second foray into the world of pop-up restauranteering will open in Bristol, UK, from July 27 to 29.

And yes, while you might have imagined that a PokerStars pop-up had something to do with online advertising, it is, in fact, a poker-themed dining experience, a gambling-culinary mash-up, to promote the Bristol leg of the UK and Ireland Poker Tour (UKIPT), which is due to take place the following week.

PokerStars has teamed up with Pata Negra, a Spanish restaurant in the center of Bristol, to re-launch the All-in kitchen, a concept that was first trialed at London’s Jones & Son restaurant earlier this year.

Essentially, guests will be playing sit and gos for their food, and a free-to-play one-table turbo tournament will determine who gets a free dinner.

In fact, it’s a hyper-hyper-super turbo, in the sense that it lasts just three hands.

The player with the biggest pile of chips at the end will enjoy a free three-course dinner, while the second and third places will receive discounts on their food.

PokerStars and Pata Negra have created some obligatory “poker inspired” dishes for the event, with a menu that includes Big Blind Iberico meats (no, we don’t get it either), Three of a Kind sweet pepper, zucchini and eggplant skewers, and The Pot, a dark chocolate dessert with olive and rosemary shortbread.

In the summer of 2006, gas prices went through the roof. Global demand and an increase in the production costs of crude oil pushed the cost of fuel up to $3 a gallon, and so the now-defunct site PokerShare.com decided to help out.

On Memorial Day, in New York, PokerShare gave away over 8,000 gallons for free, and gas guzzling New Yorkers lined up around the block to receive their $40-worth each.

Additional free food and music gave the event a festival atmosphere. Within hours the New York City Police Department closed the stunt down because the hordes were wreaking havoc with traffic flow. PokerShare got its publicity, though; the incident made the network news.

Long before the off-color marketing stunt was purely the domain of Paddy Power, there was GoldenPalace.com, and it had its domain plastered over everything from streakers’ buttocks to a woman’s forehead, where it was (and presumably still is) permanently tattooed.

Other guerilla marketing coups included buying a grilled cheese sandwich that purportedly showed the face of the Virgin Mary, for $28,000, and paying $25,000 for William Shatner’s kidney stone.

In 2005 Golden Palace decided to hold a poker game in the ring during the Angola Prison Rodeo. Four inmates squared up on the felt while a bull was released into the ring. The last man to run for his life won $1,000.

In 2006 Interpoker’s Extreme Poker Challenge pitted man against the elements, armed with nothing more than two hole cards and a starting stack.

Perhaps the most eye-popping event, however, was held in a light aircraft, 15,000 above the Mojave Desert. Players who lost their chips were simply thrown out of the plane to freefall to earth, with, of course, the aid of a parachute.