It’s Friday the 13th, and poker bot Libratus may prove to be unlucky for humans again, as poker play continues in the “Brains v Artificial Intelligence (AI)” challenge. 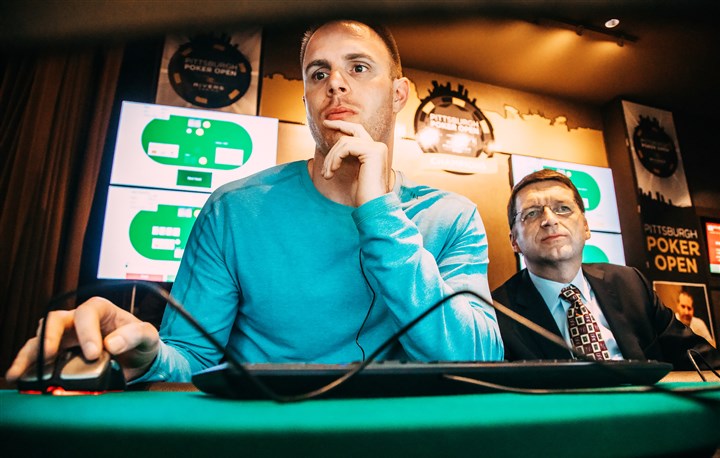 Poker pro Jason Les is battling Libratus at the Rivers Casino in Pittsburgh this week. He believes the poker bot is a huge improvement over its predecessor, Claudico, which narrowly lost to the human team in 2015. (Image: Andrew Rush/Pittsburgh Post-Gazette)

Libratus has already emerged the clear winner on the first day of the “Brains v AI,” 20-day man-versus-machine no limit hold’em battle. As the computer chips were bagged up at the end of play on Wednesday at the Rivers Casino in Pittsburgh, Pennsylvania, Libratus had collected $81,716 to the humans’ collective $7,228.

Mankind, incidentally, is represented here by Jason Les, Dong Kim, Daniel McAulay, and Jimmy Chou, who will play a total of 120,000 cash-game hands against the computer, competing for a share of a $200,000 prize pool.

Artificial intelligence guru Andrew Ng has said that humans worrying about evil killer robots is like worrying about overpopulation on Mars. But what about killer poker bots that can crush humans at cash games? Surely this is at least the first baby-step down the road towards total Armageddon.

No limit hold’em was supposed to be the thing we humans could do best. Some of us, at least. A game of imperfect information, with more permutations than there are atoms in the universe, they said. Right.

Still Early in the Game

But let’s not panic yet. Both the players, and the bot’s creators at Carnegie Mellon University, were quick to point out that its very early yet in play. Only after a suitable sample size of hands will we gain a clearer picture of Libratus’ superiority (or lack thereof). The poker bot, after all, could just be a total luckbox on a major heater.

In 2015, humankind triumphed against Libratus’ forerunner, Claudico, although the homo sapien team did boast the advantage of Doug Polk. Nevertheless, the human advantage was narrow, and the pros have said they are really noticing the difference in the new-and-improved version.

The Bot Can Play

Apparently, the poker bot’s creators have gone all in when it comes to giving their AI the very best resources.

“I felt like Libratus is playing a lot better than Claudico did in the previous challenge,” Les told The Verge via email. “Preflop, it is using a widely mixed strategy (of small bets, calls, and over-bets). This is something it would be extremely difficult/impossible for a human to balance correctly in their mind but Libratus appears to be doing it well so far.”

“The thing that impressed me the most is how unpredictable and random it was able to maneuver post-flop,” said Chou. “It also seems to understand some advanced strategies that many top regulars implement in their own game.  We lost the battle today but we are looking to strike back tomorrow!”

We’re still waiting for Thursday’s results to filter through, but in the meantime, those of you interested in witnessing the downfall of mankind can watch it unfold in real-time, on Twitch.tv.