Poker Strategy for the Rest of Us: Practicing Tournament Skills Online – Part I

It’s been a difficult time for live poker players these last few months. I played my last tourney on March 14, just a few days before Las Vegas shut it all down. I played no poker at all during the remainder of March and into early May. By then I was just itching to play, but I don’t find online poker to be particularly interesting anymore, having played more than a million online hands before I moved to Las Vegas and switched to live poker. 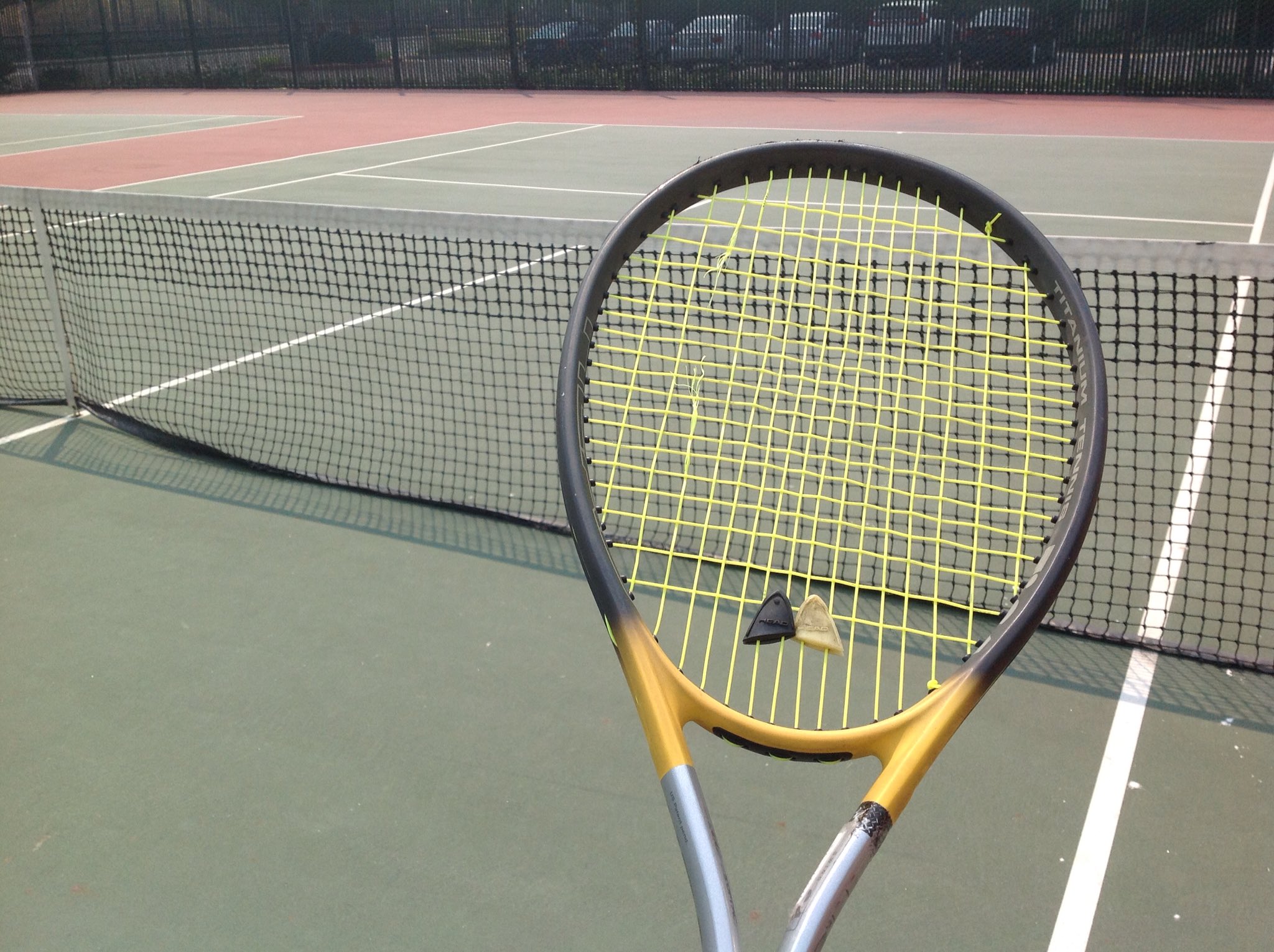 “If you don’t practice, you don’t deserve to win.”

A few Vegas card rooms have recently opened for short-handed play, and we can practice for this by playing online NL20 or NL50 6-Max games. But I have largely switched to tournament poker over the past two years, so I decided to investigate how to practice my live tournament game by playing tournaments on the WSOP online site. Hopefully, I will be an improved player when live tournament action returns.

The most common reason to play online poker is for entertainment. We can accomplish that by playing at nearly any online poker room. Even play money poker can be fun.

But many of us don’t enjoy playing poker for peanuts. We want to earn some money. We need to risk something or it’s not really poker. We could do this by massive multi-tabling low-stakes cash games, but this is difficult on US-facing sites.

The WSOP recently announced its online summer series, which replaces the summer series at the Rio. Our online tourney practice can make these more-expensive bracelet tourneys seem more reasonable. (More on that in a future article.)

Practicing with a Purpose

Since I live in Las Vegas, the most obvious place to start is on the WSOP site. Although I use the WSOP site in this article, you can apply the principles discussed here to many other poker sites, such as America’s Card Room or PokerStars.

My goal is to improve my live tourney play by practicing the online tourneys that replicate them. Of course, this will never be a perfect match, but we can use our online play to find ways to fix our most glaring leaks. So I established a few general guidelines:

Our search for good practice tourneys begins in the WSOP tournament lobby, where we can study the structure for each tournament. I have summarized a few of these tourneys in Figure 1, but there are additional good ones not listed.

After playing the $20 tourneys for a while, we can eventually progress to the $100 tourneys, which have the same structure. Eventually, we might even play more expensive tournaments, including the online bracelet series. Sounds like a plan!

I will focus the remainder of this article on the 1 PM $20 freeze-out tourney since it’s an excellent practice vehicle. I played 10 of these tourneys and analyzed their stats. Figure 2 shows the deal rate for each level from 10/20 in Level 1 to 2000/4000/400 in Level 25. We can see that the deal rate starts at about 60 hands per hour, and is fairly stable during the first seven levels when late entry ends. Antes begin in Level 10, but have no obvious impact on the dealing rate. Nevertheless, as our stacks get shorter, the dealing rate continually increases. Short-stackers seem to make up their mind more quickly, and shoving often ends the hand immediately. When a shove is called, the hand is completed very quickly. 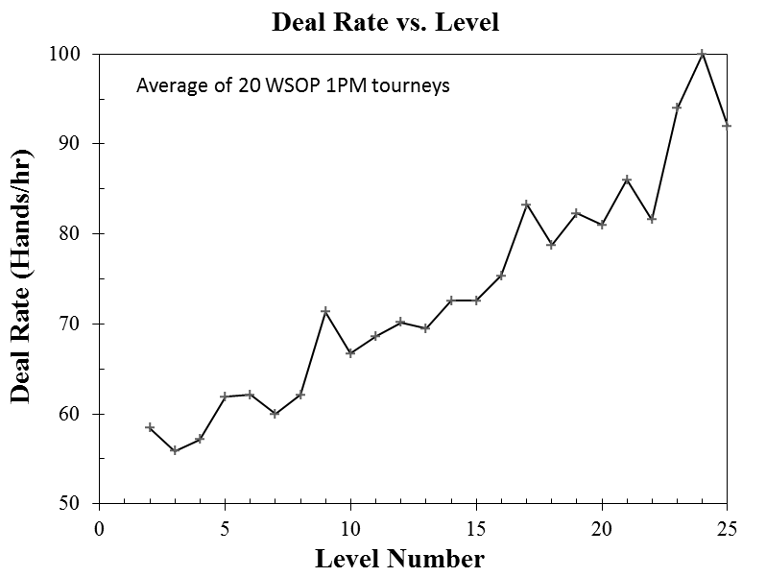 Figure 2. The Deal Rate for the 1 PM $20 WSOP tourney, as a function of the big blind level. (Image: Steve Selbrede)

Figure 3 shows the “H4 time” for several tournaments. The “H4” is the number of hands we can play before our original stack size would be reduced to four big blinds. This would be a big blind of 1,000 chips if we started with 4,000 chips. This turns out to be a good estimate for the number of hands we must play to reach the 15% cashing point of a tourney. (More on this in a future article.) So the larger the H4 time, the “slower” the tournament. A strong tournament player should want to play slower tourneys so that their skill has a better chance to overcome bad luck.

We can see that the $20 WSOP online event is roughly equivalent to the $250 WSOP Circuit event and much better than the listed Las Vegas live events. Some have claimed a useful rule of thumb that the competition of an online event is roughly equivalent to a live event at 10 times the entry fee. I can’t speak for the quality of the players, but this seems a reasonable claim when it comes to the quality of the structure.

Should We Start the Tourney on time?

Late entry is a common strategy for many live tournament players, and is also common for many online players. I prefer to enter live tournaments on time for two key reasons. First, I am a good player, so I should be able to build my stack during the early levels. Second, I use these early levels to watch my competitors, looking for reads I can use later.

My online results offer an opportunity to see if on-time entry produces an advantage. Figure 4 shows my stack size at the beginning of the first nine levels, averaged over 20 identical tourneys. We can see that my average stack doesn’t change much until the beginning of Level 6. 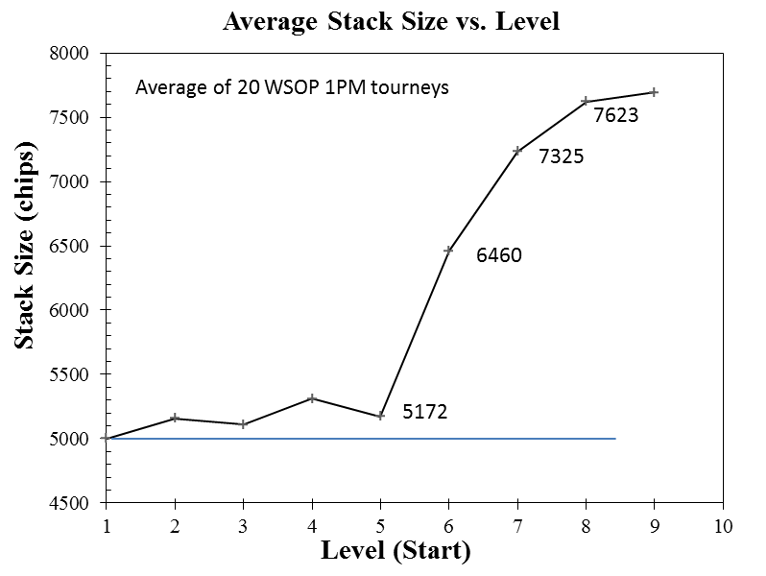 This suggests that I might be able to enter up to 50 minutes late (at 10 minutes per level) without losing significant profit. Perhaps I had been running bad in the early levels of these tourneys, but this data suggests that on-time entry might not be critical for this event.

By judiciously choosing our online tourneys, we can practice our tournament skills so we can apply them to live tournaments when they eventually return. Next time, I will discuss some practice strategies we might try in these tournaments. 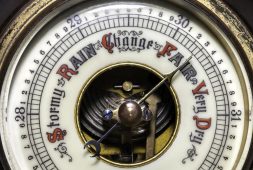