Don’t Worry, Play Poker: 7 Unnecessary Causes of Angst for You to Let Go

I play in a lot of different poker games in casinos and in home games. As a result, I meet a lot of beginning and intermediate players who are often extremely eager to learn everything they can about the game.

They read. They observe. They take notes. They pay attention. They focus really hard. They think and worry a lot about the game. The problem is, they often worry about the wrong things. Their concerns aren’t helpful — they’re distractions. 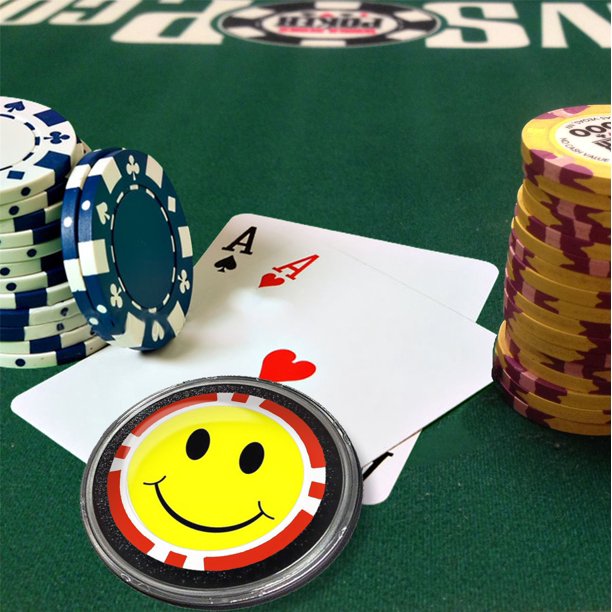 Find your happy place at the table, even when your aces are about to be cracked. (Image: Gertdog Card Guards/Walmart)

I’ve identified seven worries that many newer players have, but don’t need. I mention each one in turn, with a few words on more appropriate concerns.

Players often worry about creating an image at the table. They want to know what they should do to create an image of a wild player, a conservative player, a loose player, or a solid player. They may even make moves that they know are hurting their bottom line, just to create an image. But these worries are misplaced.

You have an image. Every moment you play, your opponents are noticing you and your actions, and then forming an opinion about what type of player you are. You leave an impression, in some way, on everyone, every time you act. So don’t waste time worrying about creating an image. Concern yourself instead with recognizing what your image is.

Once you realize what your image is — and different opponents may have different images of you — you can begin to exploit it.

New players and home-game players visiting a public poker room often worry about looking foolish. They don’t want to embarrass themselves by violating poker etiquette or by doing something that will tag them as an amateur or inexperienced player. My words to them are, “Who cares?”

So what if you look new and inexperienced? Use your image as a newbie or fool to your advantage and don’t worry about it.

I was guilty of worrying about this when I first arrived in a public poker room. I honed in on every little movement of each player and I tried to decipher what each twitch or tick meant. It was a huge distraction and it drove me crazy, but I thought that if I only concentrated enough, I would surely spot some amazing insight into whether my opponents were strong or weak, or were bluffing or value betting.

The problem is, devoting so much attention to minute details seldom produces much fruit. It’s chiefly the stuff of movies, not real poker games.

Sure, it helps to be observant and some players do give off signs that indicate whether they’re nervous or calm. But, in general, in the typical game against typical players, the energy you spend watching for small unintentional actions won’t be nearly as fruitful as just broadly characterizing a person’s general style of play.

Focus instead on noticing and remembering whether your opponent is loose or tight, passive or aggressive, tricky or straightforward. If you can observe and remember these easily observable traits, and act accordingly, you’ll be far ahead of the game and much better off than if you’re worrying about whether they lick their lips, shift their weight, or wiggle their ears before they bluff.

Ask a typical player about a session and they’ll typically talk about how much they won or lost, or whether they won or lost a specific hand. And of course, players love to tell bad-beat stories. But, generally speaking, these are some of the least important parts of a playing session.

What’s really important isn’t their result, but rather, how they played. By focusing on the critical decisions they – and you — make on difficult hands, you’ll quickly come to understand that winning or losing, while important, should be secondary to the quality of your overall decision-making process.

Sure, losing sucks, but if you’re comfortable with the quality of your overall play, then it’s easier to accept that variance is real and that, in the long run, making the right plays should help you come out ahead.

5. How the cards are running

This may seem obvious to even beginning players, but whether you’re blessed with especially good cards or not isn’t worth worrying about, as you have absolutely no control over what you’re dealt. So, why concern yourself with things you can’t change?

Even so, players often lament that they’re running bad or crow about how they’re getting by the deck. Some so-called strategists even write about leaving when it’s “just not your day,” or “you’re just not getting the cards,” This is mystical and unhelpful thinking. Sure, you may have been suffering a long losing streak. That happens, but it can also only be known retrospectively, so there’s no need to worry about it.

On the other hand, if you’ve been losing for a long time, your image may have changed. Concern yourself with addressing that, because it is something you can control.

It may also be that your long losing streak has sapped you of the ability to play your best game, and if you conclude that you’re unable to play a winning game, that may be a reason to leave. But don’t worry about whether a losing streak is likely to continue or end. Those worries don’t help you at all.

6. If opponents leave the game

If a winning player leaves the game, that may be to your advantage, not disadvantage. Maybe they’re better than you and the game will get better by their absence. On the other hand, you might want to change your strategy based on the temporary or permanent departures from the game.

If the departure leaves the game short, you may want to bluff or value bet more, depending on the style of the remaining players. If the big fish was the one to depart, leaving the game with a bunch of nits and solid players, you might want to leave too, as the game may no longer be profitable.

Similarly, if the departure leaves an empty seat, you might want to move your seat, based on your relative position to the loose and aggressive players in the game.

Winning a poker argument is the last thing you should worry about.

I frequently see extremely heated arguments over whether a player made a good or bad play on a prior hand. Players often defend their actions as feverishly as if they are defending their honor. This applies to good and bad players alike.

Remember, however, there’s no reason to either point out an opponent’s bad play or to defend your own. In fact, the opposite approach is often more profitable.

Think about it. If your opponent attacks your play and he’s correct, learn from it, don’t argue. If his attack is wrong-headed, it benefits you not to prove him incorrect, as he’ll remain with a mistaken view of the game. Similarly, if he takes an action that you know to be wrong, you’re surely better off not to draw his attention to his own error, as doing so would make him less likely to make the same mistake in the future.

Your ego may shout to correct his attack and to point out his flaw, but your bankroll will profit by remaining silent.