The Gap Principle for the Rest of Us: When It’s OK to Call Pre-Flop Raises 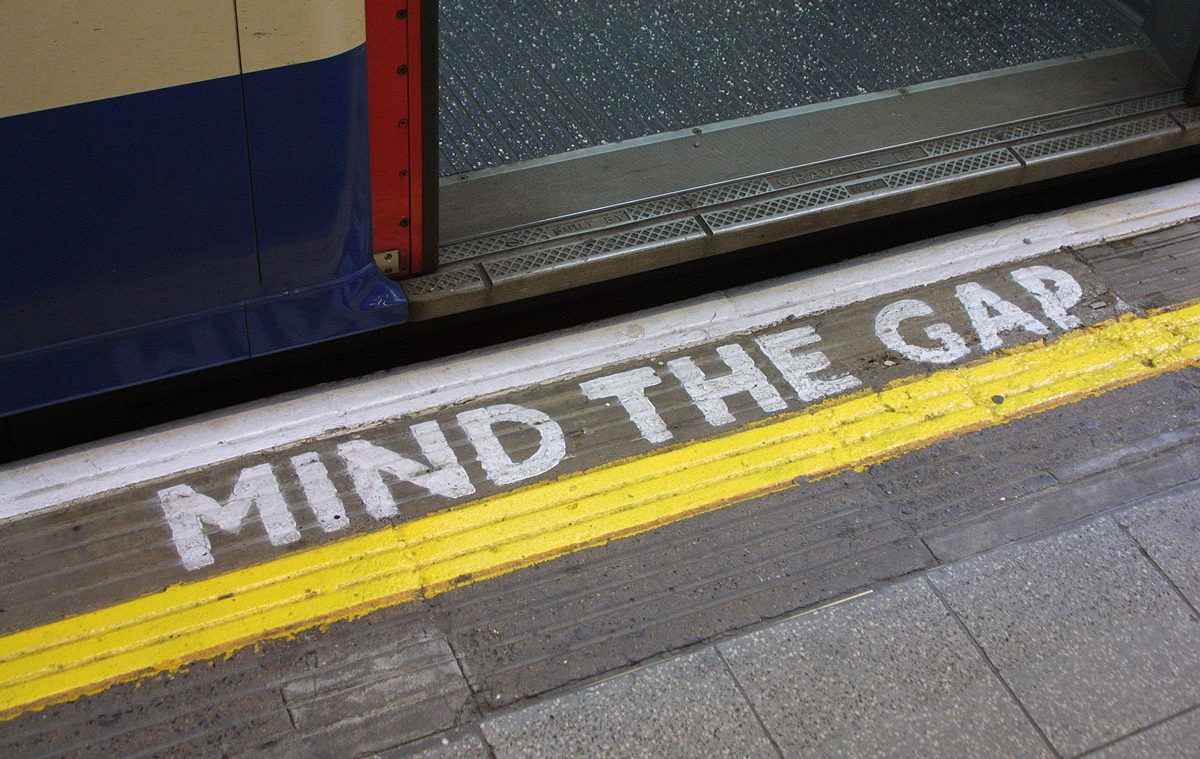 His lower PFR% means that Mr. Vegas raises with a much tighter range, yet he is getting called twice as often. This is true on the Vegas Strip, as well as in the “locals” card rooms. It is also true for Vegas $2/$5 cash games. This doesn’t make any rational sense; welcome to donkey poker in Vegas.

David Sklansky, in Tournament Poker for Advanced Players, introduced what is known as The Gap Concept, which is: “You need a better hand to play against someone who has already opened the betting than you would need to open yourself.” This definition applies to our defense of a pre-flop raise, which is to either call or reraise. “How wide that gap is depends on how tight your opponents play.”

To take into account our opponent’s aggressiveness, I have modified Sklansky’s rule: We should defend against a preflop raise with a range tighter than the raiser’s.

Most solid players intuitively understand the Gap Principle, but what should the gap be? Figure 2 shows the relationship between our online positional profit and CCPF (Cold Call Pre-flop) frequency. (A “cold call” is to call a raise without having voluntarily invested in the pot. Calling a raise from the big blind is considered a cold call since posting the blind is involuntary.) 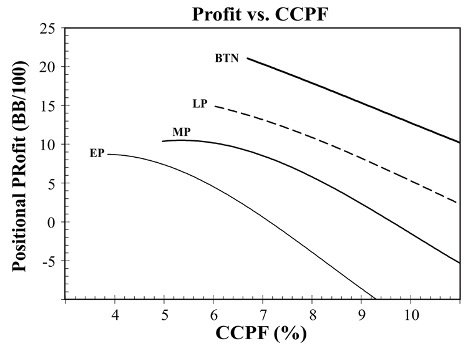 Each of these curves shows that our profit increases as we decrease our CCPF frequency. For example, our optimal CCPF percentage from the button is less than 6.5%, and perhaps much lower. (Note: these curves end where they do because few online players CCPF with a lower frequency.)

We can also see that the EP curve terminates at about 4%. Cold calling from EP means that we are UTG+1 after an UTG player has raised. So it makes sense that we should call less often after an UTG raise.

CPFR (Call Pre-flop Raise) is calling a raise after we have already invested in the pot. This could be a limp-call or a raise-call situation. It does not include calling from one of the blinds. This is more complicated to analyze since it includes a wide variety of situations. 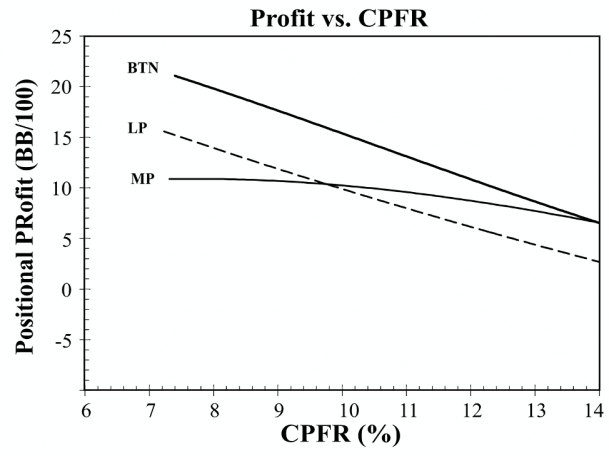 Figure 3 shows that the CPFR behavior is similar to the CCPF trends; our profit increases as we CPFR less. Since hardly any online players CPFR at lower frequencies, all we can say is that less is better.

Figure 1 shows that the average Vegas $1/$2 player three-bets less than 1% of the time, which is barely [KK+]. This means that Mr. Vegas rarely three-bets light, or his three-bet percentage would be much higher. So we should nearly always fold to a Mr. Vegas three-bet. This is the Gap Principle in action.

This also means that calling a Mr. Vegas pre-flop raise engenders little risk of being forced off our hand by a light three-bet. For this reason, we should be able to call a Vegas preflop raise more often than we can online.

The average final pot size is also much larger in the Vegas game, and a Vegas raise is much more likely to be called. This creates more dead money in a raised pot with players who are more easily exploited post-flop. Again, we should be able to call a Vegas raise more widely than we can online.

Mr. Raiser faces a three-bet so rarely that his first thought is often “probably kings or aces.” Our three-bet tends to elevate his thinking from first-level (what do I have) to second-level (what does he have). Although he might still call our three-bet, overcallers will often fold their too-wide calling ranges. Consequently, I think that we can three-bet with a range much wider than the average Vegas player.

Suppose our goal is a zero-gap and we face Mr. Vegas with a 6.0% PFR range. Then we would three-bet with a 3.3% range and call with another 2.7% range. But if we adopt a 2% gap, then we would rarely call any pre-flop raise, nearly always three-betting or folding. This is clearly too restrictive for a Vegas $1/$2 game.

The consequence of this is that our baseline defending range might be similar to our estimate of Mr. Raiser’s range. In other words, the gap would be zero. This is a very simple strategy: we need only estimate Mr. Raiser’s range. Would Mr. Raiser open with the hand we now have? If so, we can defend with it.

From this baseline, we can widen our defending range when facing a weak villain, when there are multiple overcallers, or when we will have post-flop position over the raiser. Consequently, our defending range should be higher from the button than from early position. From any position, it should be much tighter than Mr. Vegas, who desperately wants to play any hand he likes.

There are also some special situations that occur in Vegas games more frequently than they do online. For example, we might limp and call a raise:

On the other hand, I rarely call a pre-flop raise with a speculative hand such as a suited connector or suited ace. These hands don’t hit often enough and can lose even more money post-flop when they only hit a moderate flop.

I also rarely call a pre-flop raise against a good TAG, since he will be more difficult to outplay post-flop. But I will sometimes flat with a premium hand, hoping to trap him, since three-betting essentially turns our hand face up against a good player.

Some pundits recommend never calling a pre-flop raise, instead, urging us to reraise or fold. Although this is clearly a better strategy than calling too often, it misses some profit in a small-stakes live game if we can play well post-flop. We shouldn’t call a preflop raise merely because we like our hand; we should call when the situation warrants it.