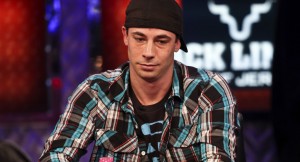 Ryan Eriquezzo must have felt this chastened after his recent outburst and subsequent disqualification from the Parx Main Event. (Image: cardplayer.com)

The poker room at Parx Casino in Pennsylvania has risen to prominence, especially in the live poker tournament world, due to series like the Big Stax. Under the influence of poker room ambassador Matt Glantz, the series has become quite important to many grinders on the circuit.

One of those grinders is Ryan Eriquezzo, a young poker player who is known for many things, one of which is his victory in the 2012 $10K WSOP Circuit National Championship for more than $416K. His presence on the WSOPC is quite common, and he plays numerous other events on the East Coast of the US as well.

Last week, however, things changed for the young pro when he committed some tournament room and game violations that resulted in his disqualification from the $1,500 buy-in Parx Big Stax IV Main Event.

He Said, He Said

The Big Stax Main Event had a total of 311 entries and a $442,505 prize pool. Eriquezzo was one of the players doing well, though he took a tough beat at one point. According to his own Twitter account, he lost with pocket aces to pocket queens, all-in preflop, for a pot worth 200 big blinds. Even so, he had 85K chips behind.

What he did after that bad beat had those chips taken out of play, however, as he was disqualified from the tournament. He crumpled the cards, something he admitted to doing, which is a destruction of property. Others claim he also berated the dealer loudly and used crude language, as well as allegedly threatening to “torch the place.”

Later, it was clarified by witnesses that the statement was, in full, that he would “torch the place on Twitter,” meaning that he would make his negative feelings known on social media. He later admitted to that, saying those words after being disqualified. He claimed that other players had crumpled cards and only received a small penalty of sitting out for a one-round orbit.

The staff at Parx had the discretion to punish Eriquezzo in the way deemed necessary for the actions that took place. Between the floor staff, eye witnesses, and the dealer, it was agreed that Eriquezzo acted in a way that was violent and destructive enough to warrant a complete disqualification from the event.

According to Glantz’s Tweets, the punishment was for “crumpling cards, throwing the cards 12 feet behind the table, [and] shoving [his] entire stack across the table.”

In a subsequent Tweet, Glantz added, “All of which he admits. Calling the dealer a ‘fat m[–]fer’ which he does not admit is what crossed the line for the floor to DQ him.” Glantz went further to tell Eriquezzo to stop blaming others for consequences that his actions caused.

Twitter responses varied from poker players and fans, some saying that the disqualification was much too harsh a response for his actions, while others agreed with Parx by saying that the outburst was strong enough to warrant the punishment. Eriquezzo still denies throwing the cards 12 feet and verbally abusing the dealer, and feels that Parx was very wrong in the way it handled his situation.

Overall, Glantz had a simple message for poker players in general.

Why was he so surprised? Things like this happen to me on a daily basis online…LOL.

Fark that wanna be idiot. Players like him give poker a bad rap.