Poker Pro Gets Beaten Up by UFC Champ 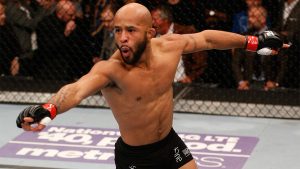 The much anticipated mixed martial arts (MMA) fights between high stakes poker pros Olivier Busquet and JC Alvarado just got a little more interesting thanks to a UFC champion.

Back in October, the two players agreed to a prop bet worth $270,000 after Busquet called out for someone to challenge him.

Wanting to try his hand at a sport he’s enjoyed watching for many years, Busquet recently started training, but if suspicions are confirmed then it might not be enough to win him the bet.

Alvarado with the Edge

As it stands, Alvarado has already trained in a number of disciplines, including kickboxing and Brazilian jiu-jitsu. Although he’s by no means an expert, he does have experience in some aspects of MMA and that should be an advantage come fight time.

However, with $270,000, not to mention the respect of the poker community, up for grabs, Alvarado isn’t taking any chances.

Although unconfirmed, it’s believed that Alvarado has been doing some training at the famed MMA gym run by former fighter and world-class coach, Matt Hume.

During the latest episode of Joe Rogan’s podcast, UFC flyweight champion Demetrious Johnson recounted a recent encounter he had with a “professional poker player” at AMC Martial Arts.

When pressed on the details, Johnson explained that the unnamed player (who many suspect is Alvarado given the details of the story and the location of Hume’s gym) came into the gym to train ahead of a big-money fight.

A Tough Lesson at the School of Hard Knocks

Unfortunately, head coach Hume decided to throw the novice into the cage with Johnson and, despite being significantly heavier than the UFC champion, things didn’t go well for the poker pro.

“I was doing my thing and I hit him in the liver,” explained Johnson.

At that point, the poker player let out a gasp before Johnson continued his sparring lesson.

“At that point, I started hitting him in the face. I’m very nice and I promise all my sparring partners that I’d never hurt them.”

But as I was hitting him in the face I said isn’t it amazing how the body reacts when you get hit in the face, you don’t even care that I’m hitting you in the face anymore. He then brought his hands up and I hit him in the stomach again,” continued Johnson.

It was as that point the poker player called time on the sparring session, but not before taking in a valuable lesson from one of the best fighters in the world.

As yet the date of the Busquet/Alvarado showdown hasn’t been announced, but what we do know is that the naturally larger Busquet will weigh in at 187.5 pounds while Alvarado will enter the cage at 165.

Whether or not he’ll need the experience of training with a world champion to overcome Busquet remains to be seen, but there will certainly be a lot of eyes on the fight when the action eventually goes down.

“I was doing my thing and I hit him in the liver”. Hahaha that’s hilarious

BTW, UFC is the best thing ever

i don’t really see how this is a story. of course a thinking mathematically inclined person who is a poker pro is probably not going to win a fist fight….