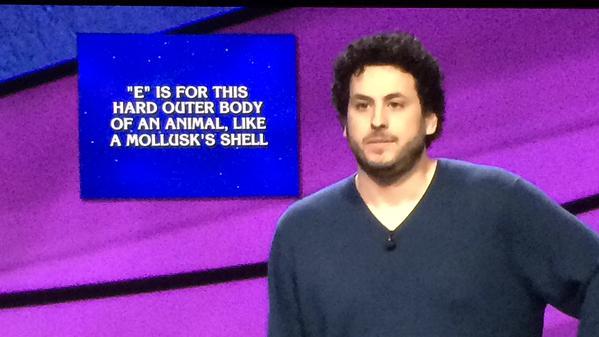 Alex Jacob used his poker skills to crush his opponents on recent episodes of Jeopardy, and returns for a third essay this evening. (Image: Twitter/ ScoldedByAlex)

Long-running game show Jeopardy has a new champ in Alex Jacob. The poker pro has now proved his skills go beyond the felt, winning on the popular syndicated game show two nights in a row, and returning tonight for a third run at trivia knowledge greatness.

For those who keep a watchful eye on the World Series of Poker (WSOP), Jacob will be a familiar sight, as he was able to make it deep in a number of events back in 2006 and 2007.

However, after amassing a poker fortune worth more than $2.5 million, Jacob decided to take a break from poker and focus on other things, one of which appears to be the hit game show Jeopardy.

During a recent broadcast, the grinder, who still ante-ups on a part-time basis at major US tournaments, won his initial match thanks to a combination of general knowledge and innovative tactics.

According to a forum post by fellow pro Allen Kessler, Jacob won his match on Friday thanks to some “well played daily double questions” and took down Monday night’s show as well to defend his title. After the episode aired, Jacob confirmed on his Twitter page that he entered with a preplanned strategy mapped out.

Like all good poker players, Jacob analyzed the format of the show and decided that the best way to exploit his opponents was to stall in the final rounds as much as possible.

“Felt like Alex Jacob was kind of stalling on jeopardy today. Wonder if they tell him to knock it off between tapings,” tweeted one viewer.

Despite having a somewhat average amount of general knowledge, Jacob played the game to perfection, much to the delight of the poker community. Cheering on one of their own via Twitter, many players congratulated Jacob on his strategy.

“If you haven’t done so yet, follow @whoisalexjacob to watch him represent the poker world while dominating next week’s @Jeopardy. #Trebek,” Grayson Nichols wrote.

Stalling Sends Some on Tilt

In contrast, the reaction from those who aren’t familiar with Jacob’s poker-playing days, his decision to stall at crucial moments put them on tilt, which is presumably what he was trying to do.

“Alex on Friday’s episode of Jeopardy is a human shell containing the spirit of a marginally intelligent sloth,” tweeted Cocorette Daydream.

Although Jacob’s penchant for game theory and strategy might not earn him as much on Jeopardy as it would at the poker table, it’s certainly fun to see someone using their skills to crush opponents away from the poker table. Be sure to watch him tonight to see if three times is the charm for this skilled player.

I saw him stall, and it was awkward. I thought he might have high.

don’t like what he’s doing with Jeopardy. Stalling, pouting, he’s making this less fun to watch.