Poker Players Sound Off, Predictably, During ‘State of the Union’
January 31, 2018 Law & Politics

Poker Players Spout Off, Predictably, as Donald Trump Deals ‘State of the Union’

Donald Trump gave his first “State of the Union” address to Congress on Tuesday night and, for a brief moment, many poker players stopped tweeting about Bitcoin to comment on the 45th US President’s speech. 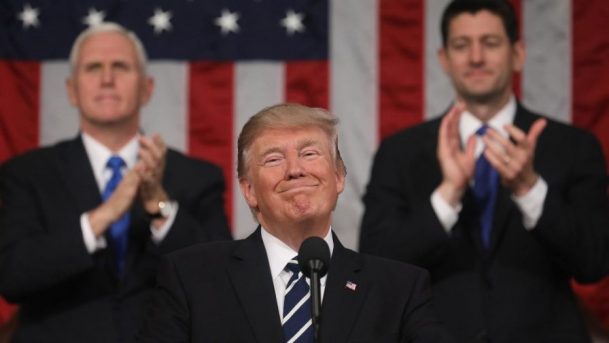 As you may have guessed, the liberal and conservative-leaning pros had differing takes, a common theme for all things involving Trump. It’s almost as if fans and detractors of the President each make up their minds about whether or not they approve of his decisions and comments beforehand.

It’s rare for any Trump supporter to question the President on social media, although Mike Matusow has, on many occasions, criticized the former reality TV star’s behavior.

But on Tuesday night, the 2013 NBC National Heads-Up Championship winner and four-time WSOP bracelet champion was all smiles.

“I truly thought our @POTUS speech tonight was awesome,” he posted on Twitter.

“Smiling ear to ear right now. #SOTU,” she wrote during the speech, later posting, “In God We Trust” after the President uttered that phrase.

Matt Glantz, a Hillary Clinton voter who has been lukewarm on Trump, liked what he heard from the President but understands why many disapprove of his actions.

“Clearly the most impressive night of Trump’s Presidency. Too bad he alienated so many over this previous year that few will ever listen to him now with an open mind or even give him a chance at this point. It’s his own fault and it’s sad,” Glantz wrote.

There really isn’t much, if anything, Trump can do at this point to gain support from most liberals. He’s burned too many bridges with rhetoric many see as racist, insulting, and downright un-American.

Scott Seiver wasn’t impressed by the Democrats’ decision to trot Rep. Joe Kennedy out to give his party’s rebuttal.

“Because if there is ANYONE that can speak to the concerns of the American public and understands what its like to be a normal person in these times, it’s a f*cking Kennedy,” he sarcastically wrote.

Doug Polk decided he wanted to be more productive than spending his evening watching a politician give a speech.

“Have to say, I didn’t hear a single disrespectful or unintelligent thing from Trump’s #SOTU tonight. Probably helped I spent the evening watching basketball though,” Polk joked.

Dan O’Brien wasn’t impressed with the speech, and took personal shots at Trump, referring to him in one Tweet as an “animal,” and suggesting Trump’s “mannerisms are just hilarious” in another.

Two notable poker players absences from the social media political fray this go-round included Daniel Negreanu, who often speaks the mind of the social justice crowd, and James Woods, who counts a legion of proud “deplorables” among his Twitter following.

Even though both these two decided to keep to themselves Tuesday night, we can safely assume American immigrant Kid Poker would have found flaws in the speech, while the Hollywood actor would have mostly approved.

Are we winning yet?

I am not an American, I am apolitcal and I did not sit through the whole address. While listening I couldn’t help thinking i was at a highschool pep rally.