Many poker players are heavily invested in more than just their poker games. Take Bitcoin, and other cryptocurrencies, for example. Doug Polk, among others, made some bold takes recently on Twitter in regards to Bitcoin, which is now hovering around $50,000. 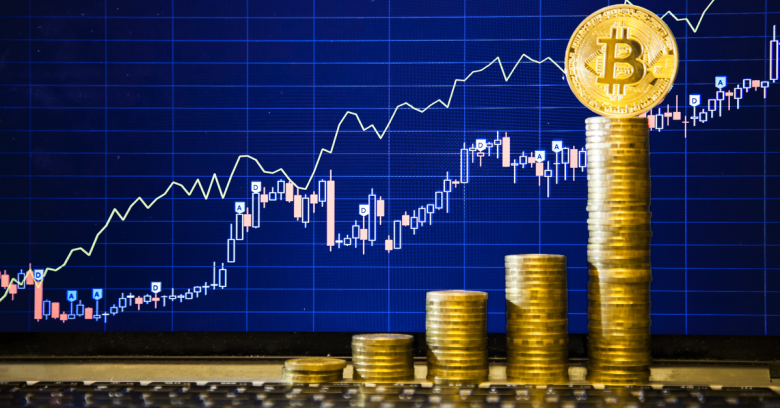 Bitcoin’s graph looks similar to a graph of a top-level online poker pro — ups and downs, but eventually turns a profit. (Image: nakedsecurity.sophos.com)

Polk, who previously ran a crypto YouTube channel, is in it for the long-haul. He believes Bitcoin is the way of the future and considers the investment profitable long-term. He certainly isn’t the only one in the poker community. Mike McDonald, Haralabos Voulgaris, and Chris Moneymaker are among those who are all-in on the cryptocurrency.

Thats also not to say I think you should sell now… I think you shouldnt. This ride could get way crazier. But what is important to take away is that when the upswing ends there could be a sharp drop, dont let that trick you into thinking its the same as the last crash.

“I wouldnt be surprised to see a sharp decrease in $BTC price in the near future, but imo we have hit a new floor (15k+). Companies like Tesla have invested substantial money in BTC. They’ll have to defend that decision, which will be difficult if they panic sell the first dip,” Polk wrote on Twitter.

Polk, who invested heavily in his heads-up poker game against Daniel Negreanu to the tune of a $1.2 million profit, is one of many poker players who has been in the crypto game for years. He first invested in Bitcoin long before it approached $5,000, let alone its current value of $50,000 for just one bitcoin.

Not everyone, however, thinks the long-term investment is worth the risk. Tony Nagatani (@AnthonyNagatani), who commented on Polk’s tweet, says, “$50K is a nice big round number and every institutional investor who bought $BTC at $10K would be hard pressed to not take 5x profit….”

Cashing in on a 500% profit sounds nice on any investment, especially one that has been relatively short-term. But some experts anticipate its value hitting $100,000 before too long, and potentially even further. Still, like any investment, there is risk and there’s no such thing as a guarantee. 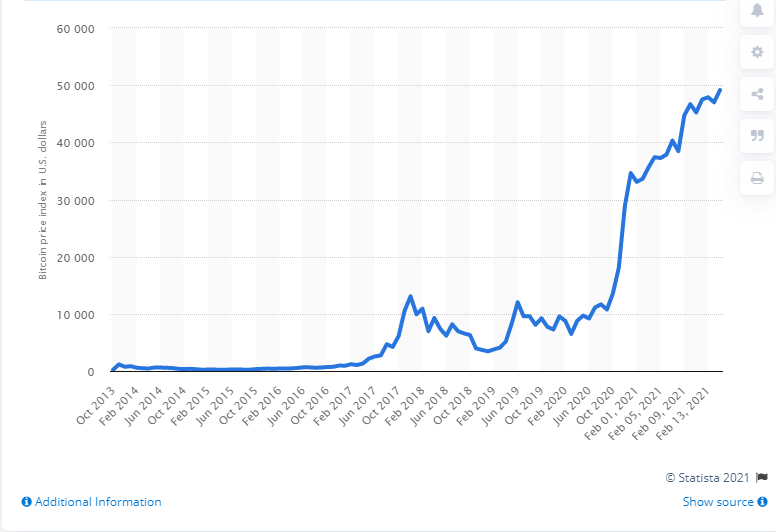 Bitcoin’s price has gone from rags to riches multiple times over the past five years. (Image: statista.com)

Bitcoin’s rise over the past few years has been met with the occasional dip, as Polk warned could occur in the near future again. On this date (Feb. 14) just four years ago, it was valued at just a shade over $1,000, nearly triple its value one year earlier. Four years later (today), one bitcoin equals more than $48,000, an increase of more than 4,500%.

What does the future hold for Bitcoin? Everyone seems to have a different prediction. Polk believes it’s a strong long-term investment and claims the new bottom is $15,000. McDonald shares those sentiments. With Elon Musk recently announcing Tesla is investing over $1 billion into Bitcoin, the Bitcoin price saw a massive spike. And now we’ll see if it’s sustained long-term.

Antanas Guoga, or as you probably know him, “Tony G,” is back in poker after spending the past six years in the European Parliament. He’s also heavily invested in crypto and is a strong proponent of Bitcoin. If you follow the loudmouth poker pro on Twitter, your news feed has likely been bombarded with his daily pro-Bitcoin posts.

Lily @LilyKnightShow, you are a rockstar!

My fave line was "I love #Bitcoin and Skittles" 😂 https://t.co/XTiOfowgTy

The Mayor of Miami @FrancisSuarez is three steps ahead of the competition. #Bitcoin https://t.co/FqSkLVr62b

Moneymaker, who recently left PokerStars after 17 years for Americas Cardroom, is also a Bitcoin investor. And that makes perfect sense considering most ACR player transactions are made through Bitcoin. He has some lofty expectations for his investment, but cautions investors about getting involved right now.

The 2003 WSOP Main Event champ says that “investing in crypto is hard because it’s easy to fall for F.O.M.O. or panic sell.”

Holding the line is easier said than done when so much money is involved. Many investors, as Moneymaker said, panic sell when Bitcoin goes through a price dip. And some fear getting back into the game when the value rises again. Others, however, are holding long-term.

That includes Doug Polk, who ripped on Dan Bilzerian in 2018 for selling off his Bitcoin at around $16,000. Bilzerian, the self-proclaimed “King of Instagram,” took a shot at the poker pro during that brief 2018 feud.

“I focused on making money and f—–g hot girls. You focused on game theory and training videos.” – Bilzerian tweeted at Polk.

Polk isn’t one to shy away from a heated debate when he’s called out. He fired back with some investment advice that has clearly proven true: “My main point is you should never be fully exiting cryptocurrency. The value will increase over time, and trying to time the market will be on average an inferior strategy.”

Three years later and Polk is sticking to his guns. The Bitcoin price has seen a massive rise since he feuded with Bilzerian. But not everyone is on board with the long-term viability of this investment.

“I’m pretty sure that Tesla has also stated that payments made in bitcoin may/may not be instantly liquidated. That definitely doesn’t bode confidence in its stability,” Twitter user @Aurmelius wrote in response to Polk’s most recent pro-Bitcoin tweet, in regards to Tesla’s recent Bitcoin investment.

That comment, however, appears to be in the minority on poker Twitter. Take @ryan_before, for example. He predicts “120k-300k by the end of the year.”

Why Poker Players are Suited for the Crypto Game

You can’t win every time you play poker. Even the great Phil Ivey gets felted every now and then. But to be a successful poker pro, you must have the testicular fortitude to shrug off the bad runs without mentally imploding. And that’s why some poker players can also thrive investing in cryptocurrency.

When the price dropped from $20,000 to well under $9,000 back in 2018, Polk never made a panic video telling all his followers to sell, sell, sell. He stuck with it, and the investment up to this point has certainly paid off much like it did after he lost $390,000 to Negreanu during one session.

Polk isn’t the only to thrive in both industries. Other successful poker pros such as Mike McDonald and Brian Rast have bet big on Bitcoin, and refused to panic sell when the sky appeared to be falling.